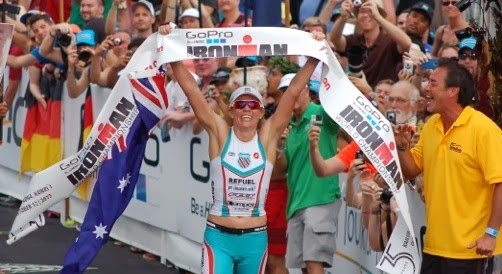 Mirinda Carfrae is an amazing Australia Ironman who has achieved incredible international success over the last 10 years. In 2006 she came 3rd in the Ironman 70.3 World Championships (Half-ironman). The following year (2007) she came first. From 2009, she progressed to the full Ironman course, the World Championships at Kailua-Kona, which involves a 3.86km swim, a 180.25km bike ride and then a full marathon 42.195km run. Since 2009, Mirinda has finished 3rd once (2012), come second twice (2009, 2011) and won the gold medal twice (2010, 2013). Mirinda currently holds the women's record for fastest overall time and also fastest running leg.

And then there are the other numerous events throughout the year that she competes in (and wins!).

You can imagine what her training schedule must be like. So I was really pleased when Mirinda agreed to answer a few questions for me about how maths relates to her sport. 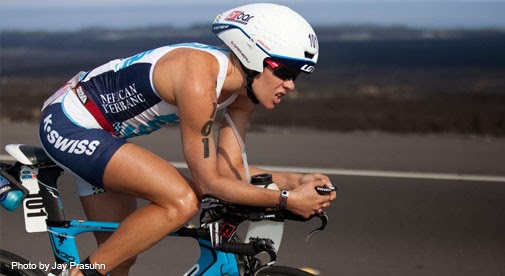 
Describe what maths lessons were like for you at school.
I didn’t mind math class in school, it certainly wasn’t my favorite but it was far from my least favorite.  Wasn’t too fond of the advanced math class I took in Year 11 & 12 because I didn’t see the point of it and mostly didn’t quite get it (only took it because it was a prerequisite for the course I wanted to get into in university).

How good do you need to be at mental arithmetic to do calculations in your head as you train for and participate in a race?
I think it’s helpful to be quick with your calculations during training and races. It’s sometimes a little harder to do the math in your head the more fatigued you get but it’s nice to be able to occupy your mind with something other than the pain during a race.

How aware are you of angles in your technique – angle of body in water, angle of body on the bike, angle of a corner etc?
I don’t think I am all that aware at all. I mostly race to feel and move my body accordingly.

When you are racing, how much is “mathematical thinking and calculating” and how much is “go as fast as you can”?
I spend a lot of the race doing the math, especially the latter part of the race. I occupy my mind with figuring out my pace and what pace I need to be holding to catch the next person or take the lead. I think I only do that to keep my mind occupied though because I am still going to race to the finish line as fast as I can regardless or whether I am in the hunt or in the lead.

Is estimation good enough or do you rely on accurate measurement of distances and times?
The more accurate the better but since the splits you receive out on course come at such random times and are generally quite varied you kind of have to be ok with estimates.

Do you keep an eye on the times of other competitors as you prepare for a race?
Absolutely, it’s a little different in triathlon since every race is different, on different courses and under different conditions.  But I like to see how people are racing leading up to a big event. 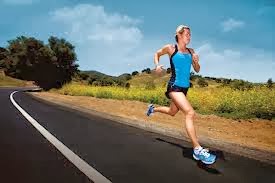 Thanks Mirinda for participating in the Maths in Sport project and for taking the time to answer these questions. Good luck for 2014!