An Interview with Ashton Eaton 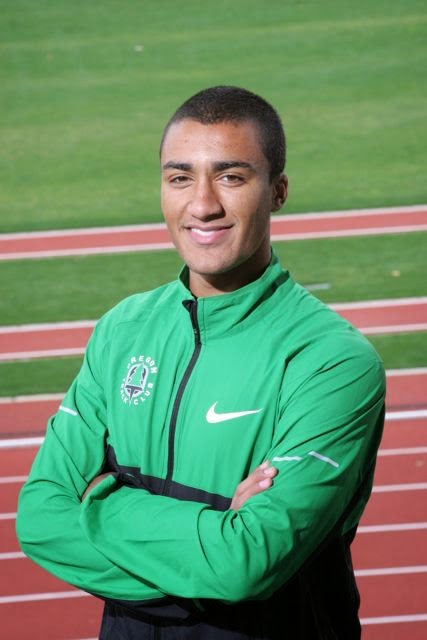 Most people on the planet would struggle to compete in a single event at the Olympic level. Ashton Eaton is a decathlete and so he has to complete 10 events in 2 days, an awesome and inspiring achievement.

And tomorrow (21st January) is his birthday!

I asked Ashton 10 questions about how mathematics relates to his events. Here is what he had to say.

Describe what maths lessons were like for you at school.
In my early years math was fun and easy.  We’d use objects to practice adding and subtracting (you have one bottle cap, add one bottle cap, now you have 2) and there was never “homework.”  It was like running a 60 second 400m.  As I got older the teachers started using projection screens and white boards and just doing example problems for the class then we’d be left with the book and our notes and minds to figure it out some other time outside of class.  Algebra, calculus, and physics became the big three.  At this point it was like trying to throw the shot put 15m.  I could only do it sometimes and when I did it was difficult.

When you left school, did you expect to be using any of the maths that you were taught ever again?
After college I never thought I’d be doing math again.  Maybe a plus or minus here and there but nothing more complex.

How good do you need to be at mental arithmetic to do calculations in your head as you compete in each event of the decathlon?
It really depends on what situation you’re in.  For example, I could be in between events with a little bit of free time and if I want to estimate what position I’m in and how many points I need to move into the next place I could be moderately good at using some mental math and have no problem.  But, what if I’m getting ready to throw the javelin and it’s my last throw?  I only get a minute to throw it.  Say, before, when I was in-between events and I figured out that I was 56 points behind first place and I know that in javelin you get 6 points every meter (not actually sure points per meter) and I have to figure out how many meters I have to beat this person by.  It could get pretty stressful and that calculation is important.  I’ve lost by 3 points once.

How aware are you of angles in throwing events, such as angle of arms, angle at release, angle of javelin etc?
I’m somewhat aware of angles during competition.  I know that if I’m “flat” during a long jump take-off that next time I jump if I just increase my angle I’ll get more distance.  I’d say the javelin is the event where we pay the most attention and even then it’s just a guess as to what is optimal.  I’m sure if someone threw or jumped to mathematic perfection they’d have an advantage over others.

When you are running, how much is “mathematical thinking and calculating” and how much is “go as fast as you can”?
When running I split these thoughts probably 50/50.  I’ll look up at the clock during the 1500m and see how fast the previous 200m was to determine if I’m on pace or not.  Then, I’ll take stock of how I feel to determine if I can go fast the next 200m or if I need to conserve for the end of the race.  The shorter the races the less this takes place and shift more 10/90 for calculation vs feel.

Is estimation good enough or do you need to measure things accurately?
The beauty of track and field is its measurability and accuracy.  I’ve seen people win races by .001 of a second!  You have to remember, when someone wins by that much, someone also lost by that much, imagine how important accuracy is to them.  Accuracy is also crucial because in track and field we’re always trying to better ourselves.  If I’ve run 10.21 seconds in the 100m before and I race again and the timer says it was around 10.2 that’s not good enough for me.  I want to know, did I run 10.20 or 10.22?

Do you keep an eye on the scoreboard throughout the decathlon?
Always.

Have your coaches ever used maths and physics to explain your performance?
They’ve used physics in the pole vault mostly.  General additions and subtraction to figure out what I need to score in the next event or events.

How do you use statistics to analyse your results?
I’ve never personally done this but I’ve seen it done on various track and field websites.  People love to figure out what percentile you’re in for the “best runners of decathlon history” or “height to weight ratio of speed compared to Olympic sprinters.”  The list goes on lim x —> a f(x) = f(a).  Haha.

Do you have any other insights to offer into how you use maths when competing in a decathlon?
This is the extent of my math knowledge concerning the decathlon. 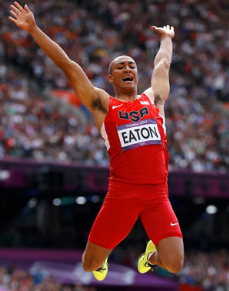 Thanks you Ashton for taking the time to be a part of the Maths in Sport project - and I love the little maths joke in there too! I really appreciate your thoughtful and interesting answers. Good luck for the 2014 season!

Posted by Bruce Ferrington at 20:38