Results from the Maths Attitude Survey

We got all 120 of the Year 4 students to complete the Maths Attitude Survey last week. (My dream is to get the whole of the school to do it, but we crawl before we walk...)

I thought it would be interesting to look at their results so I got them to complete the survey as a Google Form. 113 out of the 120 completed it.

Here are the results:

So we had more girls complete the survey than boys.

Interesting - we still some very positive words being chosen to describe maths. "Fun" was right up there but the No. #1 word of choice was "Challenging". We had a talk about that. The kids thought that this was a word that described maths as being something worthy of effort and rewarding when they succeeded with a puzzle or problem.

"Scary" was rated very low (good!) but 22 students (19.5%) still chose "boring". This may have been a result of having all 120 kids complete the digital survey together - there may have been some contamination of data. Or maybe this is really what they think. 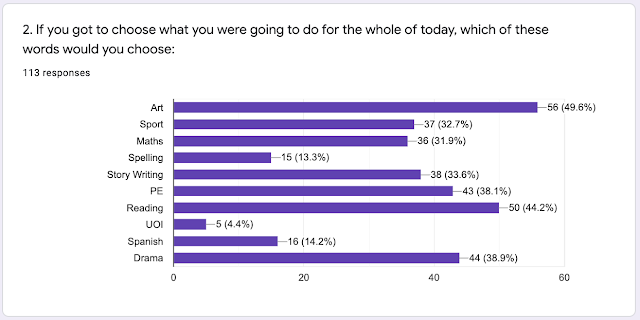 What would you choose to do all day? Art or reading or drama. Maybe this says something about our creative clientele. Maths comes in at #7. (UOI is Unit of Inquiry - we are a PYP school. Surprised this ranked so low.)

And so, on to some questions about explicit maths:

- Not too bad at multiplication...

... Converting fraction to percentages - not good...

... Measurement - surprisingly not confident. I thought this would be scored higher. Lots of "mostly".

On the original survey, students had to draw a cross on the line to show where they thought they would be. On the digital version, I was limited by the fact that I could only give them a maximum of 10 boxes to choose from.

But the results were even more revealing. Here is the data from all of Year 4: 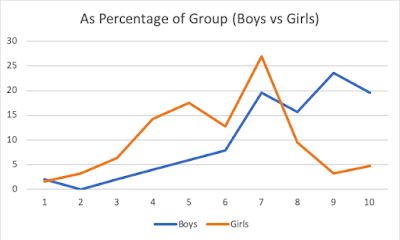 In terms of numbers, almost 60% of our boys rate themselves 8 or above.

In contrast, less than 16% of girls rate themselves 8 or above.

This is huge. These kids are only 9 years old, turning 10. How do they get these ideas about themselves?

Much work to be done on mindset.

Posted by Bruce Ferrington at 08:18 2 comments:


We had been doing an investigation into Vitruvian Man this week. You know, the picture that Leonardo drew: 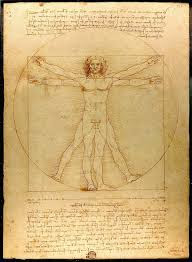 Anyway, all the scribble around the outside of the picture is actually Leonardo's mathematical calculations based on the ratios of the human body.

Did you know that, in the "ideal" human body:
- a palm is four fingers

Well, didn't we have a lot of fun exploring all these ratios and proportions! 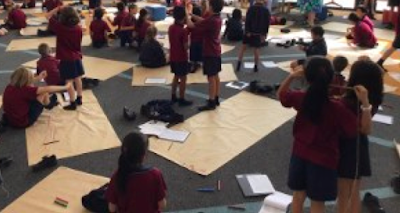 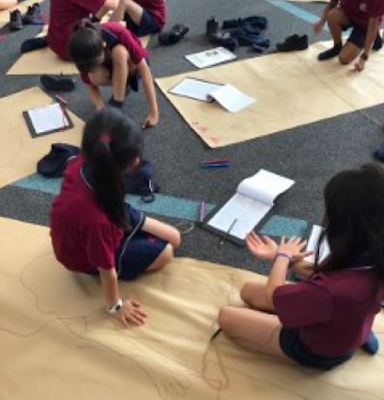 We got the children to trace their outlines and then start recording measurements and ratios. At the start, they were not too sure what ratios were - by the end they had a better idea.

So the next day, I took it in another direction. We hadn't played with blocks much this year, so I got some out and asked a few provocative questions:

How much are you increasing by?

This was to look at what happens when you use ratios to increase a given value.

Here is what the kids did: 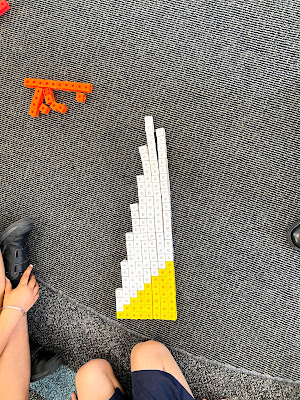 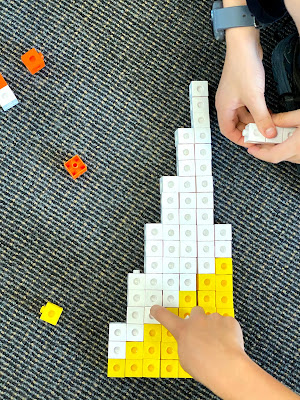 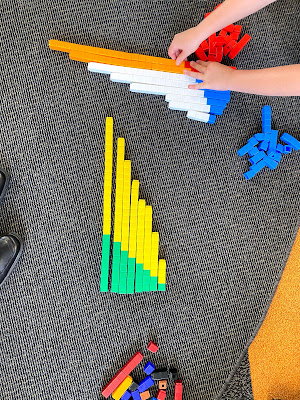 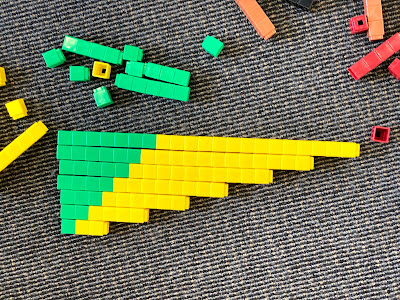 You can see what is happening here.

and so the pattern grows...

"So what might be another way to work out your 4x tables?" I asked.

And he was right.

The Distributive Law in action.

Posted by Bruce Ferrington at 23:38 No comments:

Start the Year with an Attitude Survey


Here in my part of Australia it is the end of Week 1, Term 1. Being a good teacher, I am always keen to get to know my new class quickly and to find out all about them.

And this often involves assessment.

Kind of sad if the first words of greeting are, "Hi kids! Did you have a great holiday? Sit down and do this test."

Really, doing tests in Week 1 is harsh. But I still want to know about my kids.

So instead, I give my students an attitudinal survey so they can tell me how they "feel" about maths.

I am teaching Year 4 this year. They are some of the kids I taught in Year 2 back in 2018 who did the awesome patterns you may have seen on my blog from back then. So I was hopeful that there would be some pretty strong connection happening with maths.

I don't have room to go through the whole 2 pages of the survey (if you want a copy I can email you one) but I want to highlight a few interesting questions and the results from my class.

Put a circle around the words you would use to describe
maths:

No - this is not a test to see who knows what a circle is and who can draw one. It is about tuning in to the language that the students use when talking about maths - whether talking out loud or just talking in their heads.

Students could circle as many words as they wanted to. This is how the students in 4BF responded: 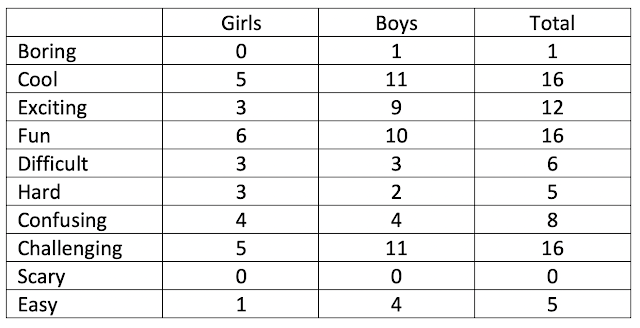 No-one in my class finds maths scary - or maybe they're too scared to admit it.

The most frequently recorded words were "cool", "fun" and "challenging". This is very positive language. Even "challenging" acknowledges that maths can require effort but that this is seen as a challenge rather than as being simply "difficult".

The one boy who circled "boring" also circled "hard", "difficult", "challenging" and "confusing". He is not a student that I have taught before. He will be at the top of my list to learn more about and to see where we can make some positive gains.

I wonder if the students will still be using the same language at the end of the year?

Another question that I use asks the students to rate their own ability at maths by putting a cross on a line. It looks like this:

This example is my "boring" boy from the question above. Definitely need to get involved here.

The length of the line is 15cm (or 150mm). With this question, I measure the position of the cross in relation to the left hand end of the line and give a score our of 150 (because the line is 150mm long, so 1 point equals 1mm).

One thing that does stand out - I need to work on attitude.

This quick survey gave me a lot of information to think about - probably more than a skills-based number test would have. There were 10 questions in all. Some questions were similar in format to the above, others were short answer and required sentence responses. I can highly recommend that you have a go at doing something similar to start your year. It will tell you a great deal about the students in your care.

All 5 of our Year 4 classes did this survey. Hopefully in the next few days I will have data from all the classes that I can share.

Following our successful application in 2018 for an ACT Government Nature Play grant, I submitted an application on behalf of the Canberra Maths Association for another grant in 2019. As we had planned in 2018, we again proposed to:

I am very pleased to announce that we were again successful in our application and got the grant. A group of about 10 interested preschool teachers met together one afternoon earlier in the year at Radford College, my school, and brainstormed some ideas. It was a productive time. I went away with pages of notes that I wrote up as the miniMaths Book 2.

The 10 tasks we came up with were:

1. Which hand? - an exploration into probability
2. Hands and feet - measuring with informal units
3. Symmetrical mandala - building a symmetrical pattern
4. Leftovers - what to do with remainders when dividing
5. There and back - giving directions to describe a journey
6. Pattern dance - using symbols to represent the parts of a dance
7. Flower count - collecting data about flower colours and representing the data as a "graph"
8. Shape detective - finding shapes in nature
9. Treasure sort - sorting objects based on shared and unique features
10. Fill the pot - how many cups of sand does it take to fill a saucepan? 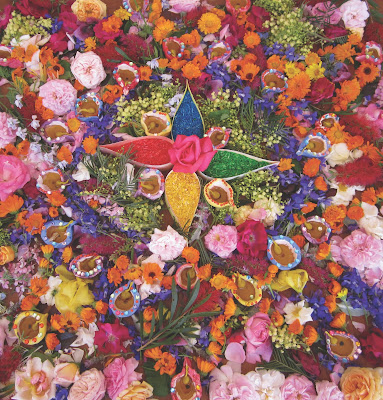 The 10 tasks make up Book 2 of the miniMaths program. Every preschool and early learning centre in the Australian Capital Territory will receive copies of the book early in 2020. 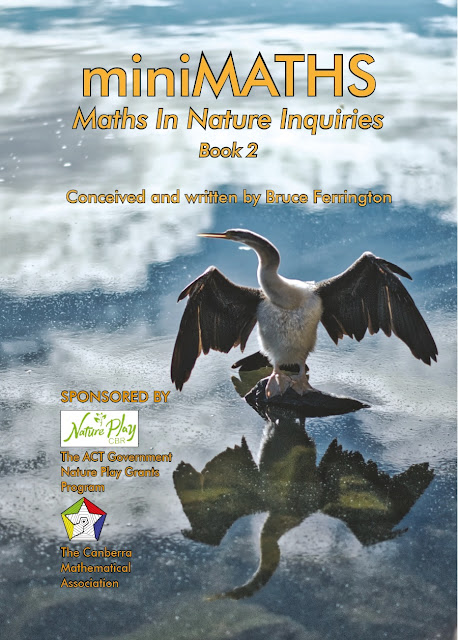 The 10 tasks have also been uploaded as a website that is available to anyone, not just ACT teachers:

Over the next week or so, I will post a bit more detail about each of the 10 tasks. Maybe you will find them useful. I would be keen to hear any feedback.

And any Canberra teachers - keep an eye out for the miniMaths workshops rolling out over January and February.


Let's have a look at place value with Year 4.


Recognise, represent and order numbers to at least tens of thousands (ACMNA072)

I got some 1mm grid paper and we started off with one tiny square. 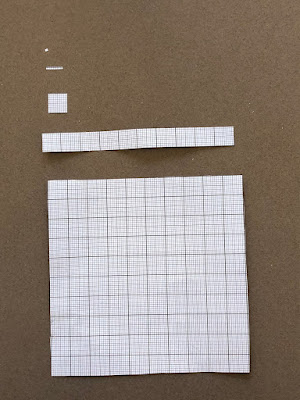 It started getting a bit technical here. It seemed like I had hit a developmental barrier - a place that required some additional cognitive effort. I was a bit surprised but we worked our way through.

Obviously (to me at least) 10 000 was going to be 10 rows of 1000. It didn't appear to be that obvious to the students. Why was there this hesitation? Perhaps this is why the Australian Curriculum identifies this as the target size to go for in Year 4. However, once we started counting by groups of 1000, we soon got the idea of what 10 000 looked like.

One of my ambitions with this task was to get a visual experience of what happens when we start multiplying by powers of 10. Also to get the connection with the decimal place value system we use - more of this later.

At this point, a few students began to see a pattern forming in the way we were representing the numbers: 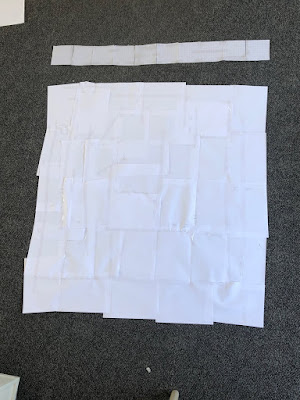 And the classroom is a bit of a mess - just the time when a member of the executive chooses to walk in... 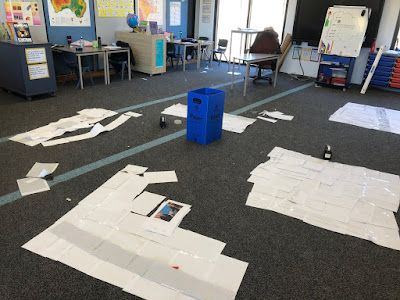 This is the room after we did a bit of a tidy up.

But the other connection I wanted to make was with the decimal place value system. Because with my models, I can now choose any of the samples to be the unit - it doesn't have to be the tiny little square = 1. It could be any of the other models we have made. The very biggest square, that we thought was 1 million when we made it, may in fact become 1 unit, or 1 thousand or 1 anything.

And if that is the case, then what is the value of the other numbers? And where does that decimal point need to go?

Posted by Bruce Ferrington at 10:48 No comments: