An interview with... Caroline Buchanan 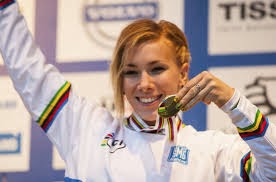 Caroline took some time out of her training schedule to answer the 10 questions below.


The questions and answers:


Describe what maths lessons were like for you at school.
Actually I was better at maths than english and so I enjoyed it more. I must admit I did struggle with maths later on in high school as maths was the only subject that was not easy to catch up with after I had been away travelling.

When you left school, did you expect to be using any of the maths that you were taught ever again?
Only in a direct sense, like buying something in bulk cheaper than buying individual packets!

How good do you need to be at mental arithmetic to do calculations in your head as you train for and participate in a race?
It’s not really a matter for me to be consciously doing that at a race but in training it is something I do automatically now. Whilst I may not have been very good at specific questions in maths I definitely understand what affects my bike and my racing! With time I have been able to feel the speed coming into a jump and judge off feel if I have enough speed to clear the jump.

How aware are you of angles in your technique – angle of a slope, angle of body on the bike, angle of a corner etc?
Definitely angles come into our from especially with the gate start the angle of our back, foot position, angle and position of crank height when applying force to get maximal power generated. The angle that we enter the corners to have maximum exit speed as well as the points on the jumps that we need to hit and redirect our force to get over the jumps as fast as possible and most bio mechanically and aerodynamically efficient.

When you are racing, how much is “mathematical thinking and calculating” and how much is “go as fast as you can”?
During races it is mostly on auto pilot going as fast as possible, however there is a lot of visualisation and mathematical thinking of cornering angles, landing perfectly on the back of jumps to gain maximum speed and “if this…. then that” scenarios which in a lot of cases is maths I guess and problem solving.

Is estimation good enough or do you rely on accurate measurement of distances and times?
In BMX, estimation is never good enough, we do special timing sessions with lights to the .001 of a second. Reaction time, timing and precision is key.

Do you keep an eye on the times of other competitors as you prepare for a race in competitions?
For time trials yes, in race competitions not really as every race is so variable interacting with seven other riders. We used to have to be aware of race times as the fastest qualifier got the first gate pick in following race/s but that is changing now with random gate draws being used more.

Have your coaches ever used maths and physics to explain your technique?
Not in a school teacher kind of way, using specific terms, but the inference is there, pumping to increase speed, manualling in certain ways will increase speed and in other circumstances it will decrease it. Thinking about it now, yes, it is something used in the sport a lot. My mum often says I am talking to the ‘lowest common denominator’ when trying to explain some things to her!

Do you look at statistics much to analyse your training and races?
Absolutely, all the time. You need figures to have a benchmark and to have goals to train towards. Some things that we look at is my power to weight ratio and monitor that, my max power, relative power, acceletation, velocity, revolutions per minute and speed etc. I am glad that I finished my schooling thats for sure.

Do you have any other insights to offer into how you use mathematics in your sport?
Probably gearing is the main set of equations important to the sport of BMX and least understood by many riders. There is a chain ring at the front with a number of teeth on it, and a sprocket at the back wheel also with teeth on it. The combination of these numbers in conjunction with tyre type affects the circumference of the wheel which gives a gear ratio. Changing say a chain ring by one tooth can make peddling harder or easier for certain tracks and will affect how far the bike will travel for each crank revolution.

I change gear ratios depending on the steepness of a start hill, how strong I am feeling and by the type of jumps on the track. After almost twenty years of riding this is almost a subconscious decision but we do work out the benefits of say a 1cm gain in travel with every crank revolution on a track especially when the first straight of racing is absolutely critical and when there may be few passing opportunities on the rest of the track. 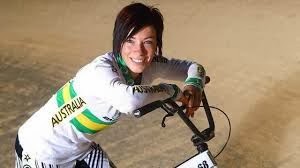 Thanks Caroline for being a part of the "Maths in Sport" project at Authentic Inquiry Maths! 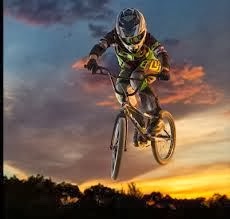 Posted by Bruce Ferrington at 11:50