An interview with Mathew Belcher 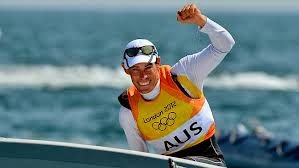 Mat Belcher is an Australian sailor who competes in the 470 class where he has been World Champion for several years - 2010, 2011 and 2012 with Malcolm Page and 2013 with WIll Ryan. He was also Olympic gold medalist with Malcolm Page in London 2012. Prior to this, Mat had also been World Champion with Daniel Belcher in the 420 class in 2000. In 2013, Belcher and Ryan were named the Australian Institute of Sport Team of the Year.

Belcher and Ryan are currently leading the World Cup point score with an unbeaten run in World Cup events this season.  He is currently in Miami preparing for the next World Cup event that starts tomorrow but he kindly took some time out to answer some questions about how maths relates to the sport of sailing. Here is what he had to say. 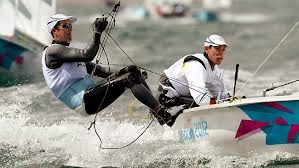 Describe what maths lessons were like for you at school. (Please be honest – not all of us loved maths at school)
I actually didn't mind maths compared to many other subjects I took. I knew the fundamentals we were learning were practical and useful. In today's world you can't get away without knowing basic maths and its applications.

When you left school, did you expect to be using any of the maths that you were taught ever again?
Actually yes, I think the curriculum we were taught was very practical to today's world.

How good do you need to be at mental arithmetic to do calculations in your head as you train and compete?
One of the key things to be successful in our sport is making quick decisions. Start line angles compared to wind angle, line bias, velocity made good (VMG) calculations, judging the fastest angle to the next mark.

How aware are you of angles in your sport?
Angles in our sport are critical, probably one of the most important aspects to our sport. Being able to judge the angle of wind approaching, heading of the boat compared to angle towards the top mark. Not to mention the 50 other boats on the course with you, crossing back and forward at different angles to the wind.

When you are racing, how much is “mathematical thinking and calculating” and how much is acting from instinct – “go as fast as you can”?
I would probably say acting from observation mainly, with a combination of mathematical thinking and instinct. Mathematical thinking relates to areas such as differences in true wind relative to current on the course, and the effects the current has in changing the angle of the breeze. Basic calculations, such as angle of start line compared to wind direction, which will allow us to determine if one end of the line is closer to the top mark than the other, allowing us to take an advantage (Sail a shorter distance).

Is estimation good enough or do you rely on accurate measurement of distances and times?
It really depends on the type of classes. In Olympic sailing we have quite a lot of restrictions in what digital instruments we are allowed. Usually estimation is good enough.

Do you keep an eye on the results of other competitors as you prepare for a race in competitions?
I try not too but it usual means I have a little look. Always nice to know how your competitors are going. However, as we race together (sometimes 50 boats on the same course) you can usually tell who is doing well.

Have your coaches ever used mathematics and physics to explain your style and movement?
Not really, but this is probably more from our side. It hasn't been a priority area for us. Certainly their are areas in bio-mechanics and pumping techniques that would help but we haven't invested the time in this area, only on on-water testing in this area.

Do you look at statistics much to analyse your training and performance?
Actually not so much on a day to day basis. We have the ability to analyse angle of heel, rudder movement to the degree and hull speed as outputs to determine how accurate we were with steering the boat positioning but it tends to be pretty blunt in our sport. You know very quickly if you are doing something wrong or not as we have so many indicators on the course that you can gauge from.

Do you have any other insights to offer into how you use mathematics in your sport?
You covered it pretty well. 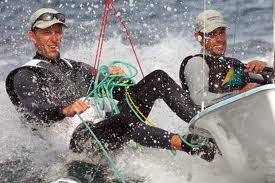 Thanks Mat for taking the time out of your busy schedule to participate in the Maths in Sport project. Good luck with the event in Miami (tomorrow) and all the best for the rest of the season!

Posted by Bruce Ferrington at 08:45