Patterns Inside a Circle


We are very lucky at our school to have some great resources.

Some of these may not be so obvious - like the big circle rug on the floor in my room. I decided today that we would use this rug as the base for our patterns.

So when the kids came in, they found I had put some materials in each circle. Some had pattern blocks, some had Cuisenaire rods.

The challenge - make a pattern inside the circle using the materials provided. 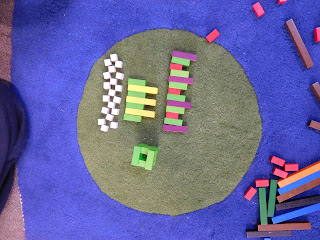 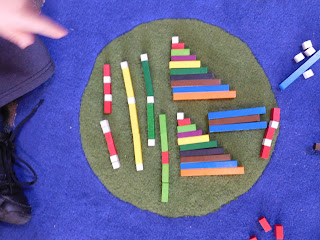 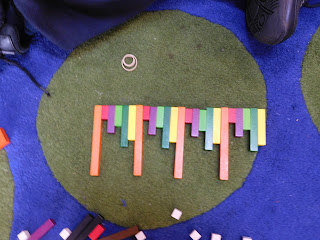 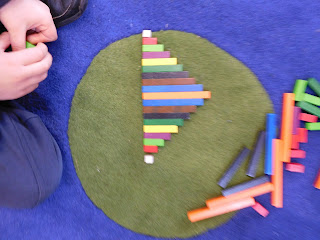 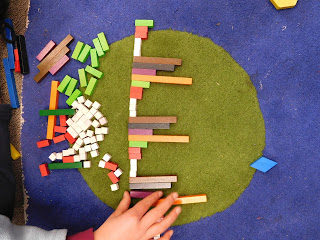 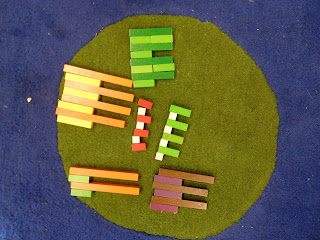 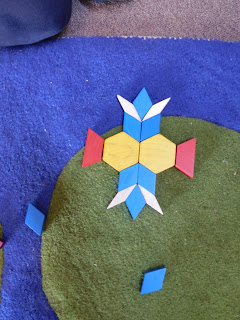 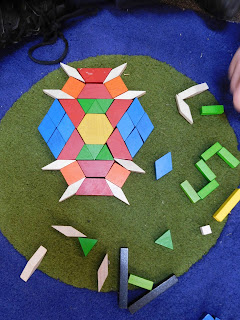 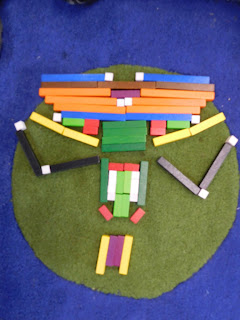 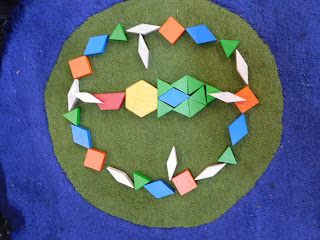 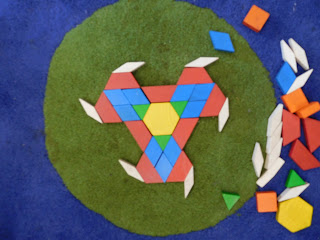 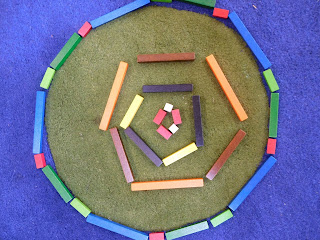 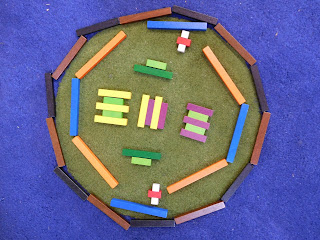 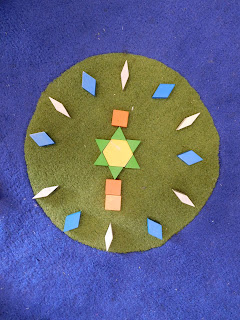 Interesting the way the kids went about this. Some took quite a while to settle on an idea. Others made several patterns. A few wanted to make pictures - the Mona Lisa, a dog, even the clock was a bit "pictorial" before I probed a bit about the need to make a pattern.

There was very little copying - or "piggy-backing" on the ideas of others. Most of the students had their own creative solutions they wanted to explore.

I was very interested to use this a bit of an assessment moment - how far had we got in two terms?

Results - I was impressed at the spontaneity and individuality of the students. I saw examples of different types of patterns that we had explored already. I was also able to identify a few individuals who struggled to come to terms with the task.

This is our last week before the mid-year break. See you sometime in July.

Oh - and if you are coming to the AAMT conference in Canberra, come and say hello.

Numbers under the pattern - the kids take control


I followed up the previous task (Numbers under the pattern) by handing over a bit to the kids.

Rather than use patterns that I had made, I gave them blank 5x5 grids and asked them to create their own number patterns, then cover them using the coloured cubes as before.

They could start at any number and count up by any number.

Here are a few examples of counting patterns these guys chose, some recognising that a calculator is a great tool for this purpose: 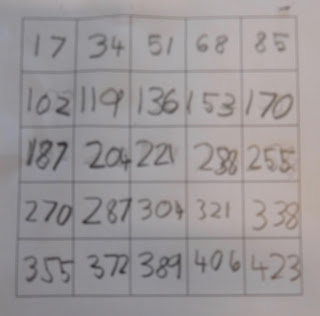 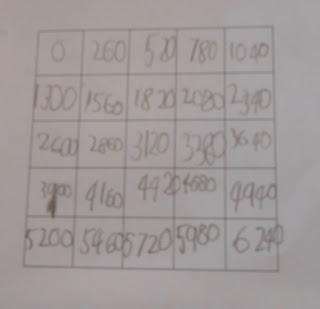 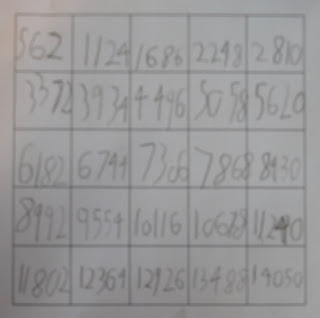 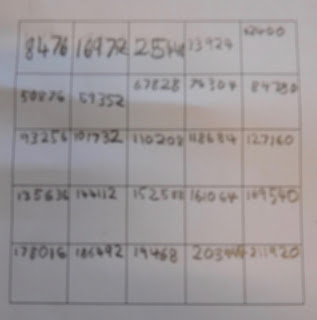 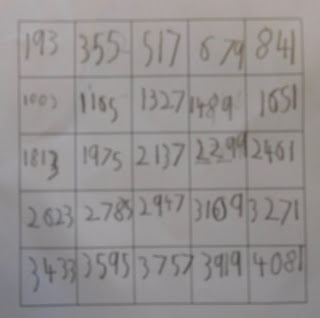 This was pretty good stuff from Year 2 kids. So good that they didn't actually get to the other part of the activity, that was placing the coloured cubes on their patterns.

Kids who chose a simpler number pattern for their grids did however move forward to the next part.

Here is what we found:

- If you start with even numbers and then add on even numbers, you end up with some pretty vertical looking patterns.

- If you use odd numbers, you are likely to find some sort of grid pattern - maybe odds and evens. 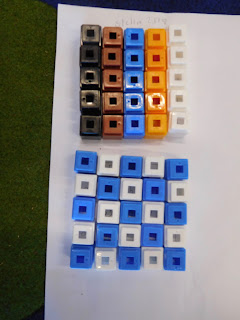 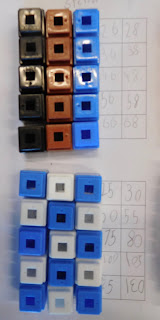 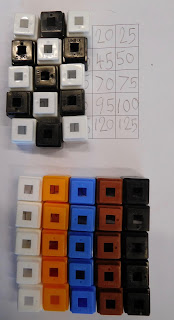 And again - can you make a prediction about what you might find under the pattern? 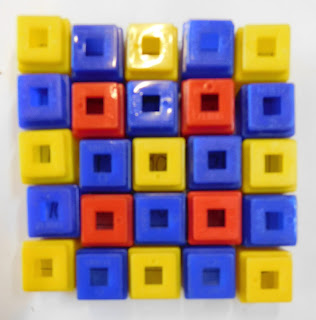 So, my guess for this one is that it is something to do with odd numbers. 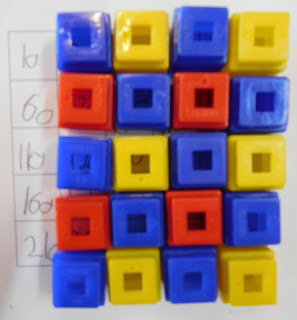 And then we had this one: 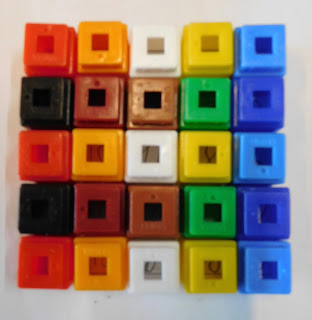 Any ideas? Then let me show you a few numbers... 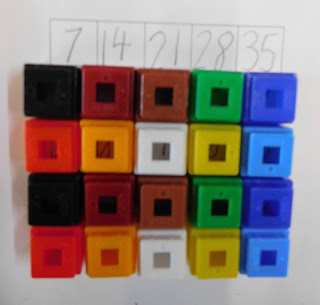 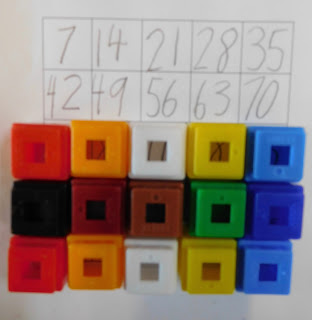 Yep - when you count by 7's, the units make a pattern that repeats after each 10th number in the series.

I wonder if that works for other numbers?

I wonder if it works for every number or just for odd numbers?


Posted by Bruce Ferrington at 14:05 No comments: