As Marilyn Burns says, pattern is the password of mathematics.

So I gave them this provocation:

So we got the blocks out and started making some patterns. Here is what the kids came up with: 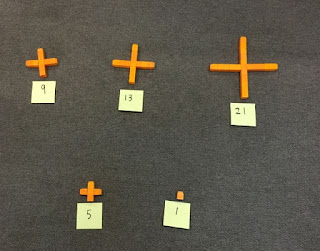 "The pattern makes a cross shape. And 21 makes the same shape so it must be in the pattern." 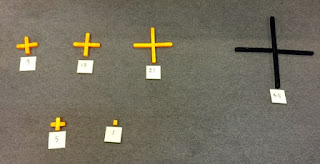 From talking as a group we were able to work out that yes, indeed, 45 is going to be in our pattern.

It was a good starting point. The conversation was never going to end there.

What other patterns can you make? Can you explain your pattern using numbers? Can you tell me what the next number will be without making the model of it? 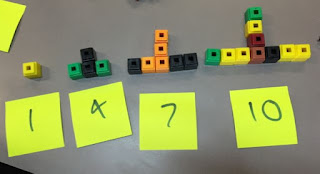 Here's a nice pattern - just like the cross but missing a leg.
CAn you see a link to the 3x pattern? 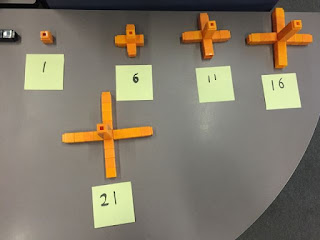 This one adds on a leg and goes 3D.
And now we were thinking about the 5x pattern.
Is Grade 2 too young to start talking about y = 5x + 1? 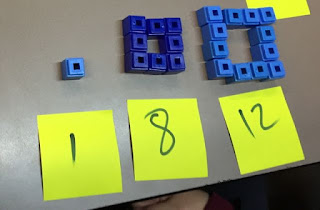 We had a good talk about this one. Is there a step missing somewhere? Should there be something between 1 and 8? Is 1 part of the pattern?

Another pattern based on squares - ah ha! Square numbers!

And then taking the square into the third dimension!

This is not the end of work with patterns for the year. We will revisit the concept many times but I feel that the kids have a good grounding now in identifying, making and explaining patterns.

And we had a lot of fun.

Posted by Bruce Ferrington at 07:57 No comments:

Email ThisBlogThis!Share to TwitterShare to FacebookShare to Pinterest
Labels: Patterns

Messing With Their Heads

I know - it's not something they teach you in your training. I know it is abuse of trust. I know I shouldn't be advocating this.

I wanted to see what would happen when I showed my Grade 2 kids this on the white board: 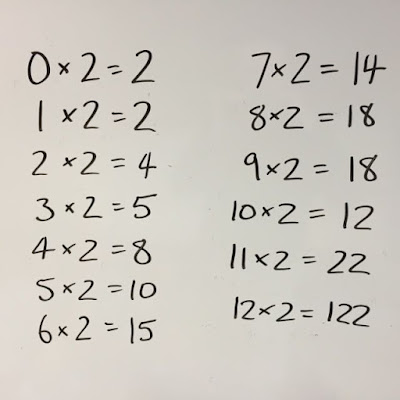 I had just spent Saturday at the Canberra Maths Association conference where I presented a workshop on multiplication. I am interested in kids understanding what multiplication is all about - not just in memorising parrot-fashion their times tables (although memorisation is important, it sure has helped me in life, but it needs to be backed up with understanding.)

I put the "2x tables" as above in front of the kids.

And they were happy to start reading them out, chanting as they went.

About half way down, their confidence started to waiver and the mumblings grew.

And some insolent 8 year olds began to suggest that I had made a few mistakes!

Anyway, I got them to help me correct my errors, which they did: 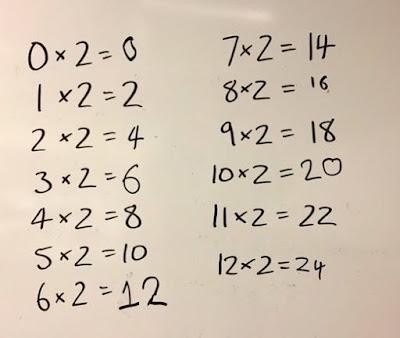 And order was restored to the universe.

Why did I do this, when I knew that many of my students were uncertain and lacked confidence in multiplication?

Why did I deliberately give them wrong information and incorrect answers that would confuse them?

Well, I was hoping that they would be able to use the knowledge they had to find the mistakes, correct them and re-establish the pattern that they knew underlies the 2x tables.

And hopefully no-one went home and told their parents that Mr Ferrington is hopeless at maths and doesn't even know that 3 x 2 = 6.

Posted by Bruce Ferrington at 07:57 No comments: