Sometimes the kids come up with some amazing things.

This happened a few days ago.

A young boy was working on activity to do with the Commutative Law. The example we were using involved the sum:

In the process of this investigation, the student started to play with the numbers.

He was right. Having played around with these numbers, I've got an idea about why this happens.

But to get this young boy thinking, I've asked him to look at other 2-digit numbers that end in 9, and three-digit numbers, and is there a pattern, and....

Email ThisBlogThis!Share to TwitterShare to FacebookShare to Pinterest
Labels: Laws of Maths, Number

The Laws of Maths - The Associative Law

Today we had a look at how the Associative Law relates to addition. It wasn't an inspiring exercise - it was after lunch, it was hot, the kids were tired and so was I. Also, it wasn't that different from what we did yesterday, as one student quickly pointed out.

So I really have to commend the class for the great things they came up with. 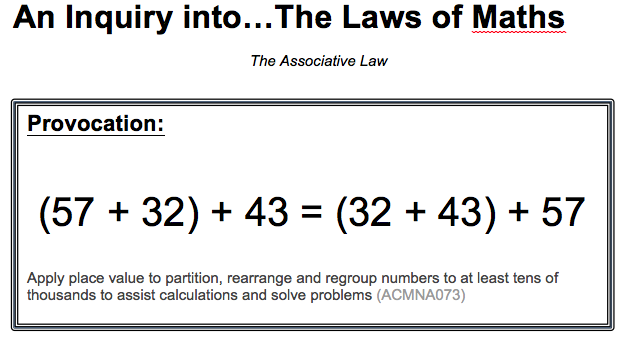 Our provocation here looked at what happens when you are adding more than two numbers together. I chose to use 2-digit numbers as practice for my new class, to see what their addition skills were like at the same time as investigating the Associative Law. (happy to report - skills pretty good!) 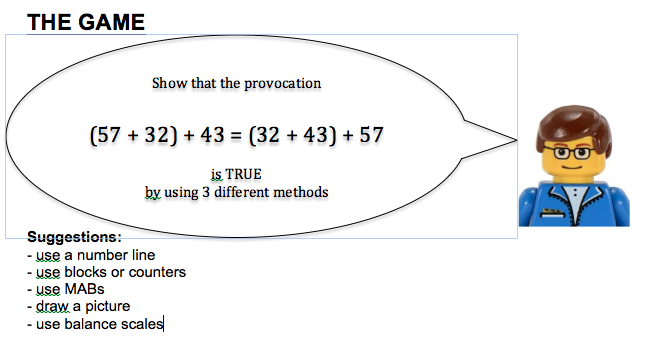 Just like yesterday when we looked at the Commutative Law, I was keen for the kids to present multiple strategies to prove the provocation was correct. This time I suggested using balance scales as one option. I was wanting to promote the idea that "=" is not the "here comes the answer" sign but is in fact the "that side equals/is the same as this side" sign.

So, when we sat down and got out the gear, the kids started to produce some interesting ideas to prove the provocation was true.

Here are some of the ideas they came up with: 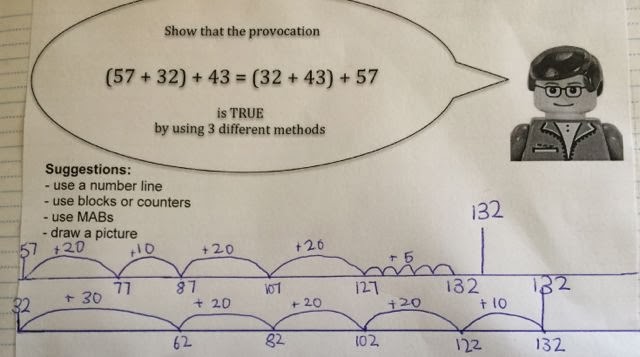 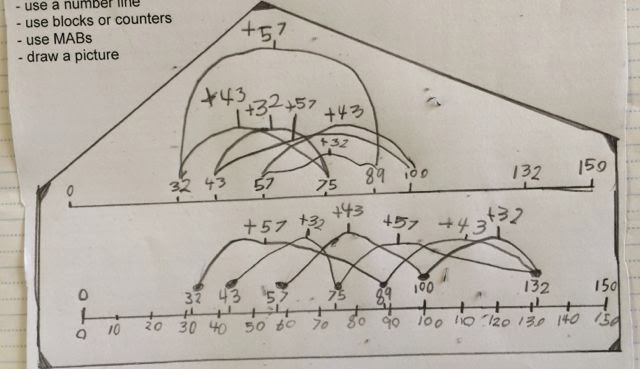 Another number line. This time the jumps use the individual addends without breaking them down into smaller parts. The top number line shows the combinations of each pair of numbers when added. This is applied to the bottom number line to show what happens when you start with each of the three numbers and how all combinations end up at 132.

Using tally marks is a slow process but it shows that you end up with the same value regardless of the order in which you write them. 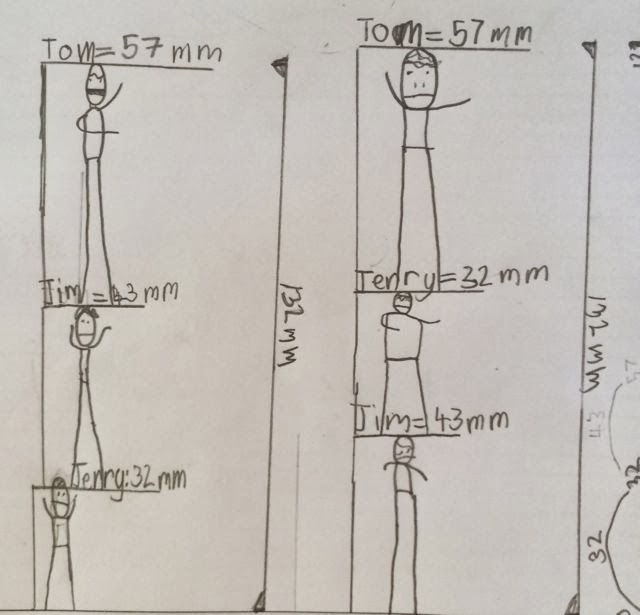 And here is the story of Tom, Tim and Terry. They stand on each other's heads and still achieve the same combined height, which isn't very tall - only 132mm. Great use of length to show how to add numbers. 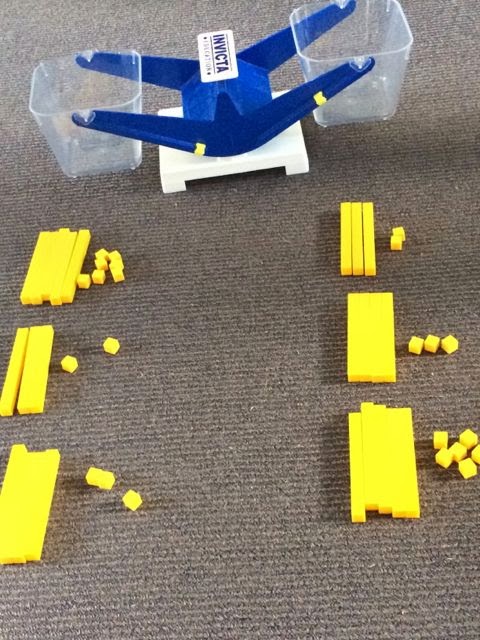 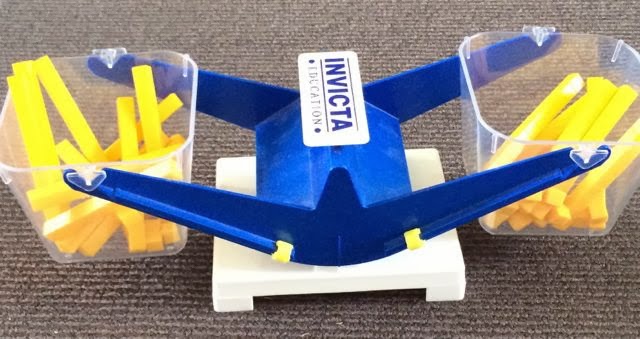 Ahh...here's the balance scales. If you count out the value of each number using the Base-10 material and put them into either side of the scales, it balances out. One of my favourite ways to demonstrate equality. 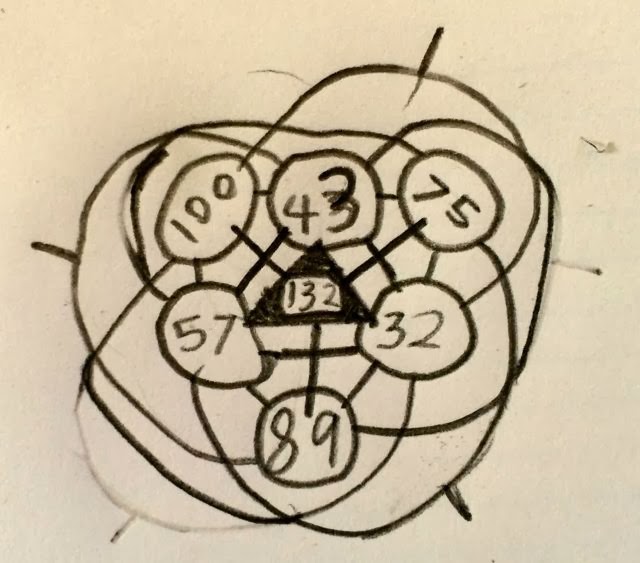 So - lots of fun. Not sure where we head tomorrow. The plan is to start to mess with their heads and introduce subtraction into the Commutative and Associative Laws...

The Laws of Maths - The Commutative Law

We have started our year inquiring into "How the World Works", looking at how a knowledge of the laws of science helps us to understand the world in which we live.

And, of course, a knowledge of the Laws of Mathematics is central to this understanding.

So, we started with the Commutative Law. 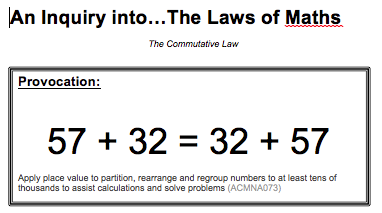 With this provocation, I wanted to see what the kids knew about addition, the relationship between addends and how the Commutative Law works.

So I asked them to show that this statement was true using 3 different methods. 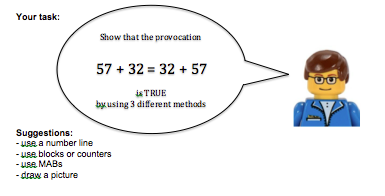 This was the first time I had done something like this with the kids this year. It was probably the first time some of them had ever done "proofs" or tried to explain their ideas using multiple strategies.

Here is what they came up with: 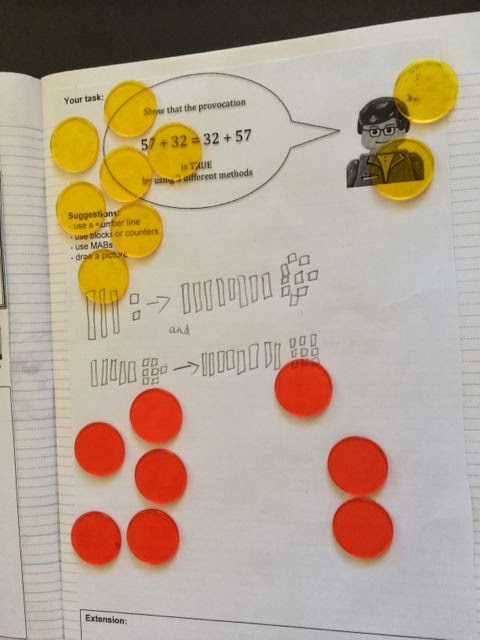 Coloured counters are used here to represent the Tens and Units columns, an unusual way to show place value. It doesn't really answer the question for me and tells me I need to spend some more time exploring how we can represent numbers.

This student has chosen to use paddle pop sticks to show the two numbers: 57 and 32. The line across the middle is to show that the numbers above the line are exactly the same as the ones below the line, therefore the sum when added will be the same. 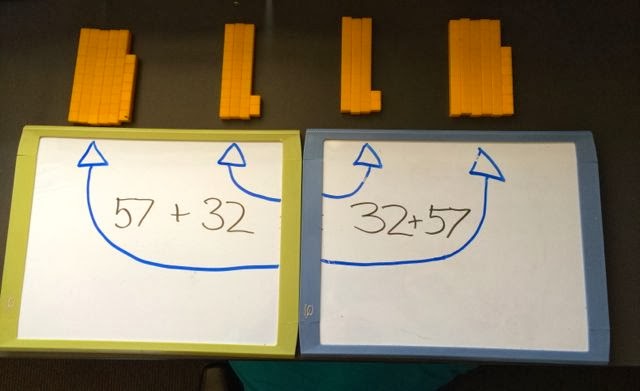 A bit like the previous example, this student is showing by modelling that each number has a corresponding number on the other side of the question, therefore two sides will be equal. 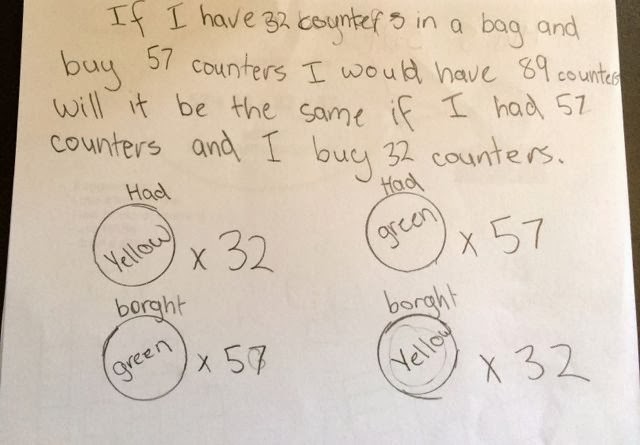 Abandoning calculations altogether, this student has written a story to explain why the provocation is true. 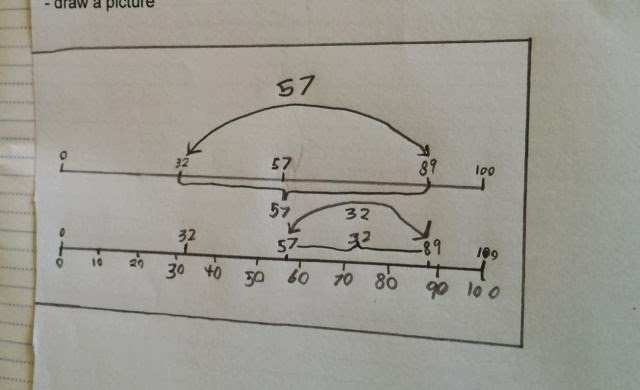 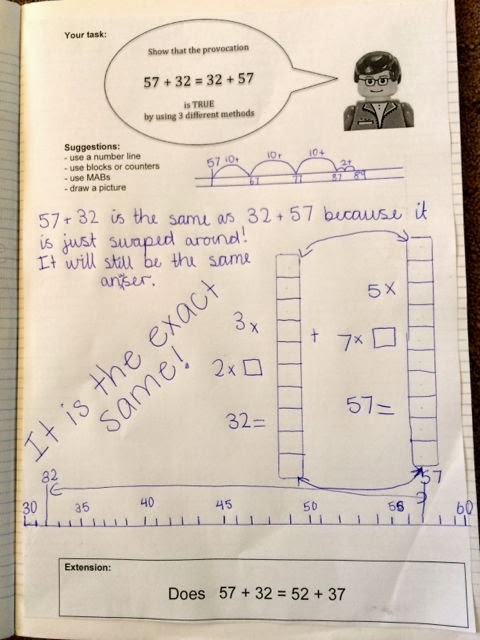 And here is a really well-displayed sample of work showing multiple strategies and explaining a bit of the thinking behind the process.

So, a great start to the year. Some interesting ideas and evidence that there is some thinking going on.

Can't wait till we have a look at the Associative Law tomorrow!

Posted by Bruce Ferrington at 23:26 No comments:

It's the start of the year for us here in Australia.

Many teachers will be putting their classes through assessment and testing, sorting out base lines and prior knowledge.

All interesting stuff but I am starting my year looking at attitudes - what do my kids think about maths, about their own ability in this subject.

Because I've got a feeling that attitude has a big impact on performance.

Driving up to Sydney in the holidays (well, my wife was driving, I was writing), I started to put together a survey.

Here's are some of the main questions I came up with:

1. Put a circle around the words you would use to describe maths: 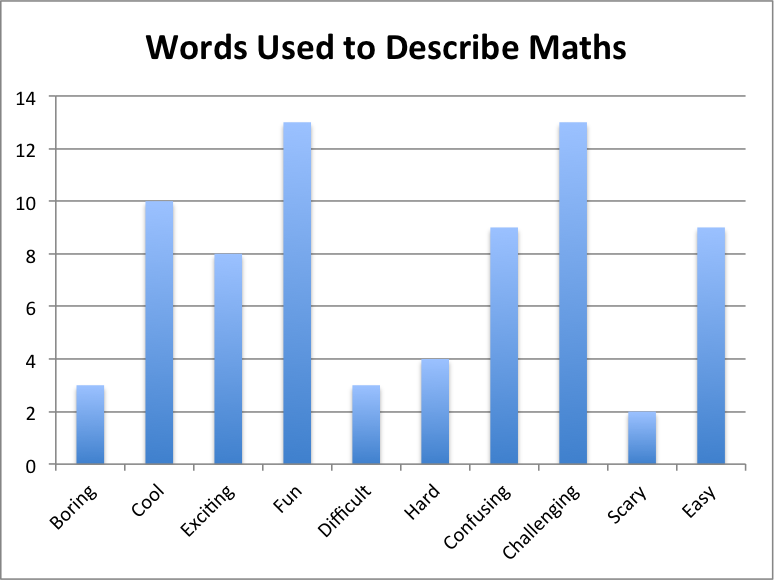 So, maths is fun - and challenging. I like this idea. You can enjoy something even though it is not always easy. And there are a few other attitudes to be aware of. Three students find maths boring and difficult and two think it is scary. I need to be aware of this when teaching my new class.


2. If you got to choose what you were going to do for the whole of today, which of these would you choose:

(Wordwork is our spelling programme; UOI is Unit of Inquiry, our transdisciplinary investigation) 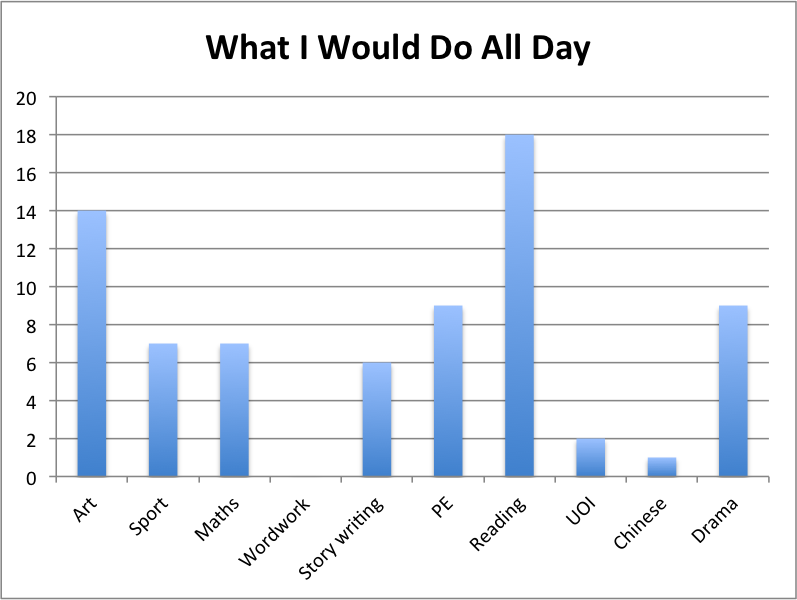 Maths doesn't score too bad in this question - I was expecting worse. But now I know what many students in my class like doing - art, reading, PE and drama. How can I use this information creatively to engage my kids in maths?

3. Put a cross (x) on the line where you think you would be:

(This line was 15cm long on the original survey paper. I measured the position of the cross in millimetres from the left hand end to get a numerical value.)

This is great - I can immediately see a few students who don't think they are very good at maths. Gives me something to focus on straight away. There are also some really positive students who identify themselves as being very capable, also really useful information to have.

I did ask a few other questions - favourite part of maths, least favourite part, best thing you ever did in Maths, what would you change - but these three produced (for me) the most interesting data.

So - work to do! A few attitudes to work on and some kids to motivate. I will run this same survey at the end of the year. I wonder if anything will change?