An Interview with Tommy Franzen


Tommy started his dance training in Sweden, where he is originally from. Initially he was only taking streetdance classes but soon his eyes opened for other dance styles as well. Tommy began working professionally soon after that at the age of 14 in the musical “Joseph”. He stayed in Sweden until the age of 19 going from musical to musical before he got a scholarship for a 3-year performing arts diploma course at the Urdang Academy in London.

Tommy is probably mostly recognised as the runner-up of BBC 1’s “So You Think You Can Dance” 2010 but some might have seen him in "Mamma Mia – The Movie", "Some Like It Hop Hop" at Peacock Theatre, "The Five" and "The Prophecy of Prana" at Barbican etc.

Tommy is also an active choreographer. He has choreographed for "Some Like It Hip Hop" and "Blaze" (Peacock Theatre and world tour) and Cher Lloyd’s music video and the live performances of her UK charts #1 hit single “Swagger Jagger” etc. Last year Tommy won an award for “Outstanding Performance in Modern Dance (male)” by the Critics’ Circle “National Dance Awards” for his efforts in “Some Like It Hip Hop “ and “The Rodin Project” with Russell Maliphant Company. He was nominated for the same award in 2010 for “Goldberg” with Tamara Rojo at The Royal Opera House and “Blaze”. This year he co- hosted the awards alongside Bennet Gartside. Other nominations Tommy has had are Laurence Olivier Awards 2012 for “Outstanding Achievement in Dance” and South Bank Sky Arts Awards 2013 for “The Times Breakthrough Award ”.

Tommy kindly agreed to answer some questions for me about how mathematics relates to dance.

The Questions and the Answers


1. Describe what math lessons were like for you at school.

I really enjoyed maths in school. I did pretty well in it and it was something I wanted to be good at.

2. When you left school, did you expect to be using any of the math that you were taught ever again?

I expected to be using it a lot more than I have. It's starting to come in handy in the last few years as I've gone in to business as well. I use it for my accounts and also creating spreadsheet calculations to analyse numbers etc.

3. Do you divide dances or movements into parts or sections that might be expressed as mathematical fractions?

There is a trick called a 540 due to the amount of degrees you turn around. We also count dance normally in counts of 8. So when we learn new choreography we break down the phrases into fraction of maybe 1, 2 and 4 for example.

4. How aware are you of angles in your technique – angle of body, angle of arms and legs, angle of movements?

I'm very aware. It's important in certain dance style to have your arms for example horizontally to the sides or elbow bent by 90 degrees. In ballet you are aiming to get 180 degrees of rotation of your legs when heals are touching each other. I've got about 90 degrees so I'm clearly not built for ballet.

5. When you are moving in a performance, how much is “mathematical thinking and calculating where the space is” and how much is “feel for the space”?

It starts off as mathematical when you make the spacing and then it's more a feel for the space when you perform. In some shows I've done we've had numbers at the front stage left matching stage right. That makes it easy when you are initially spacing it to see if your opposite is on the same number for example.

6. Is estimation good enough or do you rely on accurate measurement of distances and times?

7. How aware are you of timing and beat when you are dancing?

Timing is very important. In some styles like hip hop dance styles your timing has to be impeccable as you are dancing to every little sound in the music. Contemporary dance can float a bit more over the top and then just pick up some key moment in the music.

8. Have your teachers or choreographers ever used math and physics to explain your technique?

One choreographer I've worked with called Russell Maliphant is trained in Rolfing and is seeing the movement in a very anatomical and physics kind a of way. Otherwise I haven't come across it a lot.

9. Do you look at statistics much to analyse your training and performance? 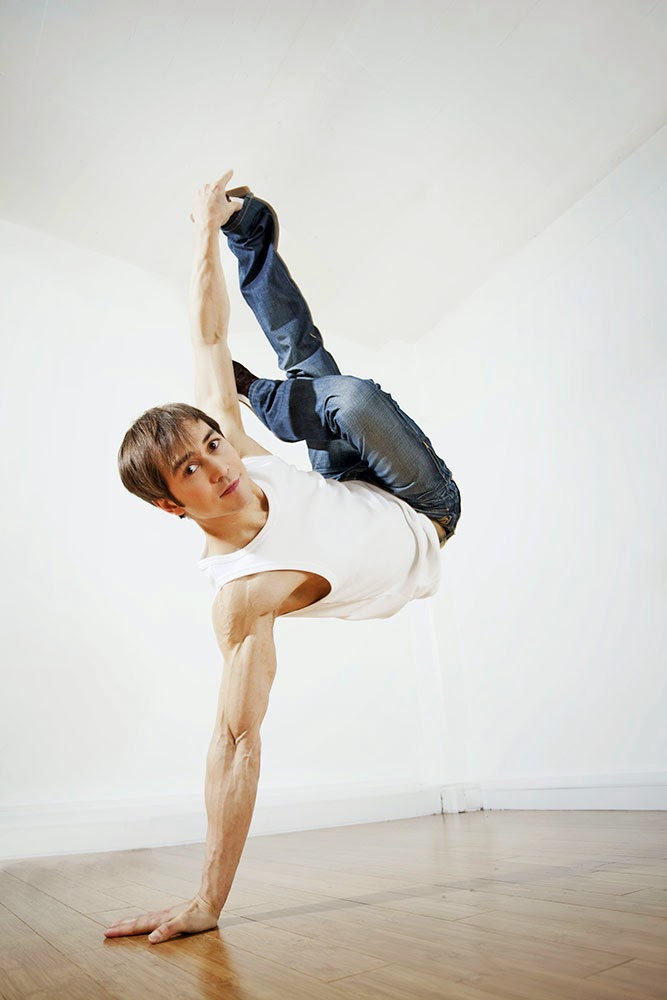 Thank you Tommy for your participation in the "Maths in Dance" project.
We really appreciate your generosity with your time and thoughts.

Posted by Bruce Ferrington at 19:41