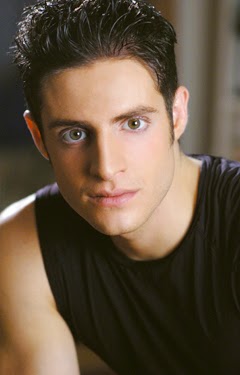 An Interview with Michael Apuzzo

Michael grew up in North Haven, Connecticut and graduated Yale University, Magna Cum Laude, in 2005 having studied Economics and Theater. Michael began acting at age 6 and has not stopped since. His work ranges from classical theater to contemporary and on camera, and his credits include work on all the New York City based soap operas, feature work in several award-winning independent films, credit working on the HBO pilot "Bored To Death" and a feature performing on "Live! with Regis & Kelly". He began his dance training while in college, performing and choreographing in undergraduate organizations, and then debuted professionally performing at the Yale Repertory Theatre.

Michael has performed in numerous musicals and at equity theaters across the country, and recently finished performing on the national tour of Twyla Tharp’s Broadway show, Movin’ Out. A former NYC math teacher, Abercrombie&Fitch model, 2nd Degree Black Belt, and active AEA and AFTRA member, Michael was overjoyed to join the Paul Taylor Dance Company in the Fall of 2008 and has been performing with the company full time since. Michael is also the author of the recently published young adult book "Flying Through Yellow".


from Live with Regis & Kelly

Obviously he is a really busy person so I was particularly impressed when Michael agreed to answer some questions about mathematics in dance.

The Questions and Answers


1. Describe what math lessons were like for you at school.

Most people would tell you that they hated math growing up. I on the other hand really (really) loved math growing up. I always liked the concept that there was always one right answer, especially in algebra. But then I came to love geometry because of the creative shapes and the concept of graphing through space. Math seemed both academic and artistic to me even at a young age. Also, lessons were exciting and manageable because I would always figure out a solution to every problem.

2. When you left school, did you expect to be using any of the math that you were taught ever again?

Of course. Post school I was a full time math teacher for one year, teaching in the Bronx. I also used it to budget my spending and manage my finances. Living as an artist in NYC can be / is demanding and challenging.

3. Do you divide dances or movements into parts or sections that might be expressed as mathematical fractions?

To a degree- I usually divide each dance by musical sections (mathematical fractions). I count almost every step in each dance. Rhythm and time signature are a few variables that can mathematically alter or divide the dances as well.

4. How aware are you of angles in your technique – angle of body, angle of arms and legs, angle of movements?

Very aware! A dancer is always trained and critiqued for their lines which ultimately are measured in the angles of their body positions. This would include the degree of turn out (or angle) of their legs and feet. Even the angle of your head relative to the rest of your body is important for making shapes in movement.

5. When you are moving in a performance, how much is “mathematical thinking and calculating where the space is” and how much is “feel for the space”?

A smart dancer always has strong spatial awareness. I try to be as aware as possible, including my spatial relationship to other dancers and to the marks on the stage. As I perform I rely on my feel for the space around me.

6. Is estimation good enough or do you rely on accurate measurement of distances and times?

The marks on the stage are accurate including center and quarter marks.  I rely heavily on those.

7. How aware are you of timing and beat when you are dancing?

Extremely aware. Every step has a choreographed position in the music, and especially in an ensemble, your timing for movement and musicality must be accurate.

8. Have your teachers or choreographers ever used math and physics to explain your technique?

More and more. Some teachers use anatomy charts to show what body parts are being used or overworked by certain movements. Choreographers generally originate movement through body positions and musical interpretation, and don't rely as much on math during creation.

9. Do you look at statistics much to analyse your training and performance?

Marginally. Perhaps when analyzing what movements or techniques lead to injury and when calculating injury prevention. But performance is a live art, and unlike solutions to math problems, they are not meant to be perfect.

10. Do you have any other insights to offer into how you use mathematics in dance?

Dancing is a calculated art form. Often you have to calculate when you should stretch your foot to jump and land safely and with ease. You have to be aware of the degree of contraction in your back, the alignment of your hips over your shoulders, and the spacing of your head relative to the rest of your body. Making dance shapes is similar to making geometric shapes, and proper ones have certain angles in order to make them correctly. As much as I love the Mathematics in dance as movement, dance is also an art form. At the end of the day, you have to let go and live in the moment that is live theater. My greatest challenge and biggest thrill is enjoying the moments when I am dancing, whether they are right or wrong, and believing in the live art I'm creating as it happens. 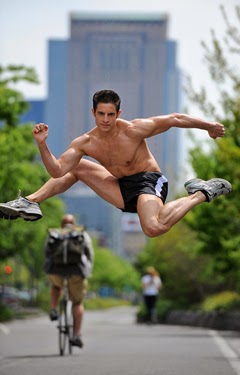 Thank you so much Michael for this amazing insight into the relationship between dance and mathematics. Your ideas have really made me stop and think - I hope there are a few teachers and students out there who have been provoked in the same way!

Posted by Bruce Ferrington at 19:58