We've done a lot of inquiry-based activities in maths over the last year. It has been fascinating to watch the kids (and their teacher) develop their understanding of mathematical thinking.

But as I reflected back on what we have been doing, I started to wonder if my inquiry maths journey was more than just a series of fun activities. Shouldn't inquiry go a bit deeper?

Well, I had made an effort to link our maths to what our unit of inquiry was that we were investigating. We are a PYP school (International Baccalaureate Primary Years Programme) and we have 6 units of inquiry each year. Making authentic links is central to true transdisciplinary learning.

But is this enough?

And what about those left-over bits of content that don't fit authentically into any of the 6 units of inquiry? You still have to teach them. We often refer to them as the "stand alone" bits of the curriculum.


Last week, we launched into an inquiry into number patterns. It was something we had to "cover" (don't you hate that expression - sounds like you're making a bed or tiling a bathroom floor rather than inspiring children to learn...).

Here's where we went on our journey.


We started with the provocation - "The Password of Mathematics is Pattern" - taken from one of my favourite books: "The I Hate Mathematics Book" by Marilyn Burns.

What did this statement mean? Does it apply for ALL mathematics? And what type of patterns are we talking about? And what is a pattern?

This was a very interesting discussion.

We followed up with the kids creating 10 of their own patterns. They shared their patterns with a partner. The partner was asked to add the next number to the pattern and explain what was happening.

Here's a few patterns they came up with. See if you can find the next number:


The debrief was interesting. Here's a few of the comments:

"I know these two are the same but I don't know what they're called."

"Is it a pattern if you add and multiply?"

"It's a pattern if the change is regular."

We also found one of my all-time favourite movies on Youtube: 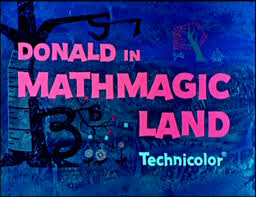 Donald in Mathmagic Land - a 1959 Donald Duck classic. I remember watching this (several times) when I was in high school on a 16mm movie projector.


Next step was to find out a bit more about patterns. Some independent research uncovered several different types of patterns. We found out about:


Students were able to share what they found out about each type of number pattern and discussed how the patterns looked. Mathisfun.com came in handy here.

Now we knew a bit about different sorts of patterns, the next step was to see if we could sort out a few examples. I provided about 20 examples of different patterns, some written numerically, some as pictures or diagrams.

Using our 6 groups of patterns that we had identified, we proceeded to spend the next hour arguing about what went where and why. Some were easy - others less so.

Here is how it looked: 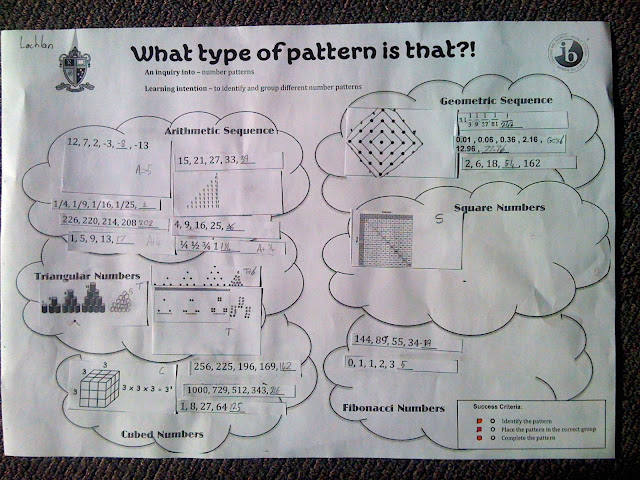 It's a bit hard to see properly but there were 22 patterns that the kids had to place in one of 6 groups.
There's a diamond-shaped pattern that is in the "Geometric Sequence" group that proved difficult.


There are some great clips on Youtube that we had a look at, to see what other people had learnt about patterns. 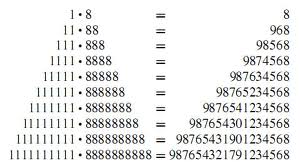 Then we grabbed the i-pads and headed outside to photograph any patterns that we found. Finally, we imported the photos into the Comicbook app and annotated our comic strip. This provided an opportunity for the kids to demonstrate their understanding of patterns.

Here's some examples of these: 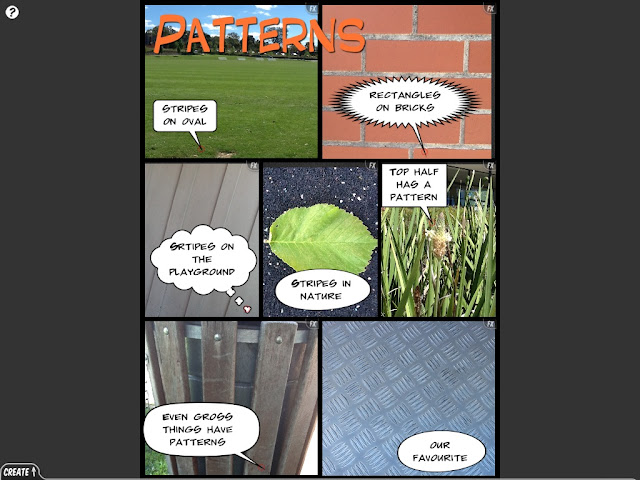 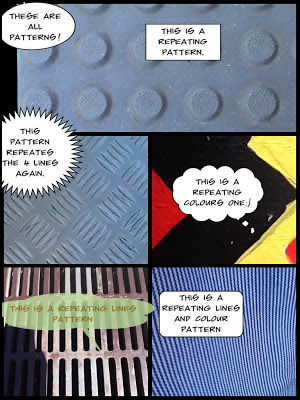 
This inquiry cycle was conducted over 7 days. After it was concluded, I had a few questions for myself:

Posted by Bruce Ferrington at 11:57