Playing with the Number Line

A lot of the work we have been doing this year in Year 2 has been inspired by a couple of people:

The following activity is based on a lesson from PASMAP. The kids loved it. Have a look.

We started with a blank number line on a piece of paper about 3 or 4 metres long. I included arrows at each and then marked on zero.

I told the kids we wanted to make a number line that went up to 50. Instead of marking in each unit, I thought it would be quicker if we just counted up by 5's.

But where should we put the tick marks?

And where should we put 50?

We knew we had to make the marks evenly spaced so after trying a few unsatisfactory alternatives (a hand, a pen, a shoe, a small diary) we finally settled on a library book that we could use to mark out our number line.

We knew how to count by 5's so marking it out was pretty straight forward. We did this with a red marker.

After some negotiation we were able to agree where to put the 3's numbers. We did this with a blue marker.

Once we had marked in the counting by 3's pattern, it wasn't too hard to convince them to find where the 4's pattern would go. we did that one in green.

Panorama shot of the number line. 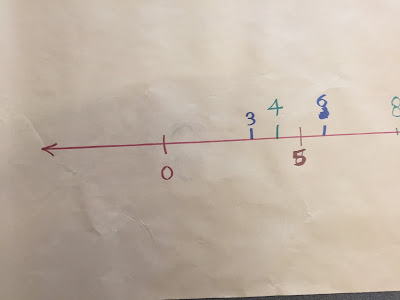 This is how the number line started out... 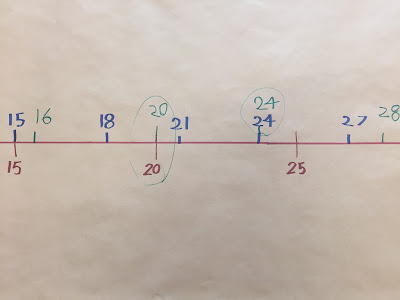 ...but as we progressed down the line... 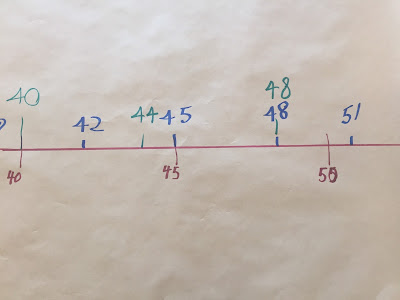 ...we soon noticed something...

"Hey! Some of these numbers have two colours!"

Great observation for an 8 year old. And so ended Day 1.

I wanted to reflect a bit on what we had done with our number line and then push on a bit further to see where we might end up.

I had a think about some questions that had been prompted by the initial inquiry into the number line and wrote these onto the paper.

We have rotating activities for maths groups on a Monday morning, so I made the number line one of our tasks. As the groups rotated, the students got to add their bit of thinking onto the number line.

Here is how it unfolded...

There were a couple of places on the number line I wanted the students to explore. 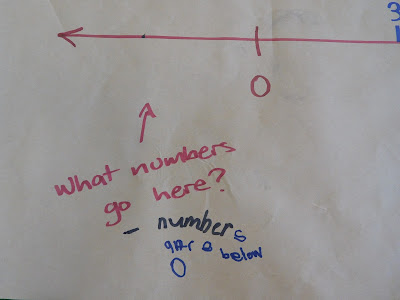 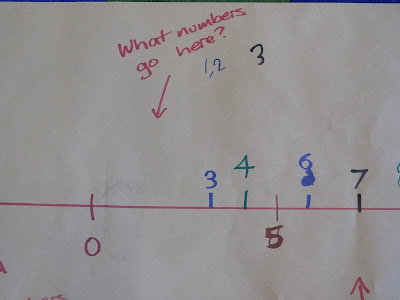 So what numbers are meant to go in these gaps?
Even though we don't have a tick mark for them (yet), there are still some numbers to account for in these spaces. 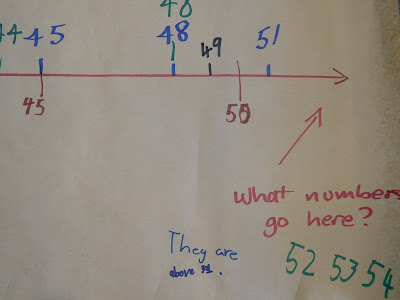 And what are the numbers that come after 51?
One student started listing them but quickly realised this was going to be a big job.
Instead of naming all of them, we designed a group called "Numbers above 51".


2. Is our number line structurally sound? Does it work? 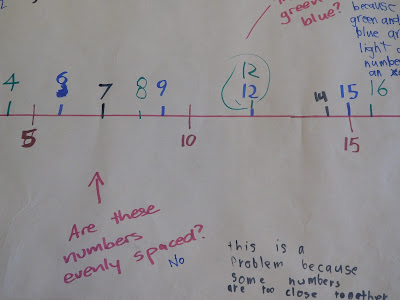 There were concerns about some of the spacing.
We knew they were meant to be evenly spaced.
"This is a problem because some numbers are too close together." 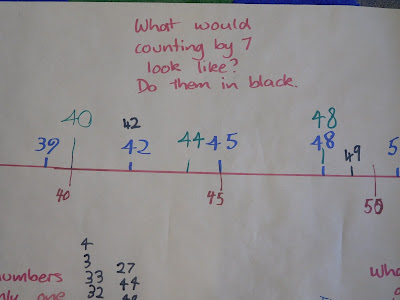 I wanted to throw in the 7's pattern to see how they would go.
Worked it out pretty well.
I am setting them up to find prime numbers and we needed to eliminate multiples of 7.

The rest of this inquiry looked at places on the number line where a number is part of more than one pattern. 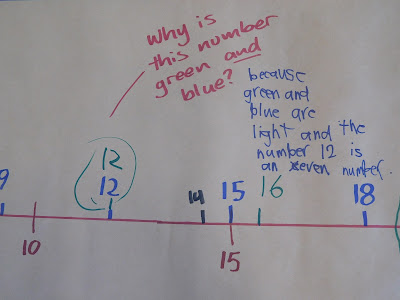 Took us a while but we got there in the end. 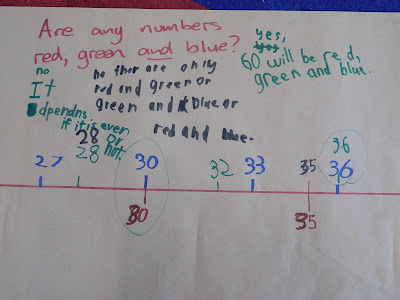 So I wonder if there will be a number that is blue, green, red AND black??!!

Yes, replied the kids, but it is going to be a long way down the number line. Probably 2 million.

Email ThisBlogThis!Share to TwitterShare to FacebookShare to Pinterest
Labels: Numberlines