What a week - I am exhausted! I imagine the kids are too after an amazing PYP Exhibition. This is a culminating activity  for students who reach the end of the Primary Years Programme where they get to develop their own inquiry into an area of interest.

Being transdisciplinary in nature, I am always keen to see how the kids will use maths in their Exhibition presentations. How will they display data? How will they analyse data? What creative ways will they find to use maths to make sense of what they are doing?

It will probably take a few posts to get all the information up about the different inquiries the students engaged in.

Here's an example of how one group inquired into the use of transport by people coming into our school each morning... 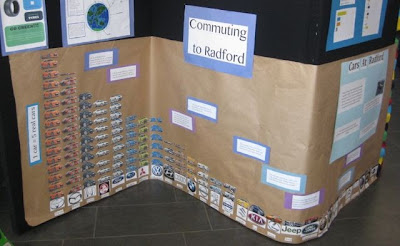 The "Transport" group decided to collect some data about the makes of cars that come into our school each morning and also how many people were in each car. So they got to school  about 45 minutes early and set themselves up near the front entrance.

When they collated their data they decided to display it as a picture graph because the audience for exhibition was going to include a wide age range, from pre-school to pensioners. 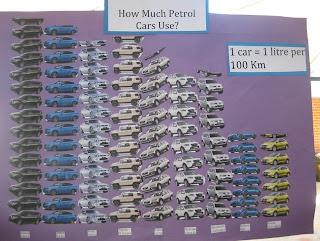 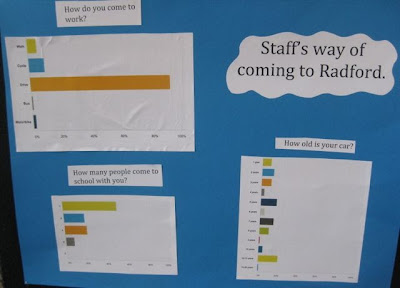 They also distributed a survey via Survey Monkey to all the staff at the school to see how they commute. The first graph shows that the vast majority drive cars while only a few walk, ride bikes or catch buses.

The second graph asked how many people came in the car with you. This question was a bit ambiguous as there was no option for zero - did it include the driver or not? Anyway, the most overwhelming response was "1" - which might mean none or one.

The final graph asked for the age of the car that was driven. They asked this question to explore the idea that older cars produce more pollution. It also showed that not many teachers have new cars, in fact many have cars that are 10 years old or older.

The data for this group was well displayed and easy to read. The really exciting part was reading their analysis of what they had learnt.

Well, I'm not buying a Lexus then - I think I'll get a Land Rover.
Or...if you can afford a Lexus, do you worry about the cost of petrol?

Australia is very big on 4x4 cars. Interesting to see some data.

Can you get this from the data or would you need to ask a few more questions?

This one makes me ask a few questions - where are they driving? City? Country? How fast are they going? Does it matter? What type of Toyota do they have? How big is the bucket?

Like all good learning, it made me want to ask more questions. Hopefully, the "Transport" group feel the same.

Posted by Bruce Ferrington at 11:41