Yesterday was the Canberra Mathematical Association Conference. We had about 120 people attend, which was pretty good for Canberra I think. Sadly, I might have been the only primary teacher there.

Note to primary teachers - find your local Maths Association and join it. You will get a lot out of it. I came away with a bottle of wine for being a presenter, a set of 3D shapes that I won as a lucky door prize, a cool tie with numbers and maths symbols that I bought for $10, a free "CMA 50 Years" lapel pin and a wireless printer/scanner/copier/fax that one of the reps was selling off for $40.

But I also was able to attend some really interesting presentations, mostly from secondary teachers - but interesting none the less.

However, one session that was aimed at Primary teachers was called "50-50" presented by Theresa Shellshear from Australian Catholic University. 50-50 was the theme for the conference, 2013 being the 50th anniversary of the CMA and also International Year of Statistics.

Theresa presented a range of probability games and activities for using in classrooms. Here they are, supplemented with a few of my own.


To Play: A game consists of 10 rounds by default (see options below). All players are 'standing' as each round begins. Players roll the die (take turns or have a specified 'roller', as desired). If a two, three, four, five, or six is rolled, all standing players add that number of points to their scores for the current round. A player can 'sit down' at any time. When a player sits, he or she safeguards all the points he or she has earned in the round, but is not able to earn more points until the next round. When a one is rolled, all 'standing' players lose the points they have accumulated in the current round. The player with the most points at the end of the game wins.

There are lots of variations on this game - change the number of rounds, change the "greedy pig" number from 1 to something else, include a "Double Whammy Special" round where all scores are doubled etc
These rules taken from http://www.math.usu.edu/~schneit/CTIS/GreedyPig/

Use a deck of cards with the picture cards removed. Everyone starts on 50 points. Take turns turning over a card from the deck. If it is red, add it to your 50 points, if it is black then subtract it. Winner is the person with the highest score after 10 rounds. 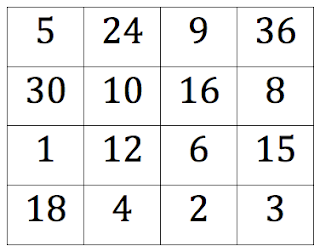 Get the kids to chose other types of dice to use and redesign the board. How does this change the game? What other variations can you include?

Plot the numbers on a number line. What is the difference between them? Who has the biggest difference?

As a variation, you could roll the dice twice and record the numbers as fractions, like 1 and 6 becomes 1/6. Find the difference between the fractions. More challenging for those who want to go a bit further.

Remove the picture cards and 10s from a deck, leaving 36 cards behind. Deal these cards into 9 piles of four cards, face up, set up in a 3 x 3 grid.

Choose a target number (such as 12). Players take turns picking up cards that add to make that number. When a pile is exhausted, get a card from another pile. Winner is the player with the most cards at the end.

This is a game I came up with. You start by giving everyone in the class $100 - it doesn't have to be real money, they can just write down $100 on a piece of paper.

The teacher (ie the bank) gets all the money that is lost.

A good way to show that the odds are stacked in favour of the "house", as the teacher will come out well ahead of most of the students even though a few individuals might get lucky. 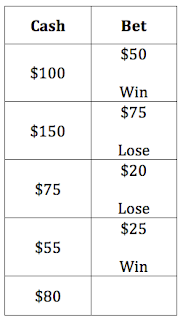 Here's an example of how we set it out. The students keep a running tally of their individual cash total and how much they are prepared to risk on each throw of the dice.

Here's a few other resources for chance and probability activities:

Posted by Bruce Ferrington at 17:21