So, for home learning last night we had some data to handle.

The activity is part of the AAMT National Maths Day activities - see the website:

So the kids drew up tables of data, comparing different foods groups between the countries and included their own data from their own kitchen cupboards. All part of the Australian Curriculum (ACMSP148: Interpret secondary data presented in digital media and elsewhere).

But then came the interesting part - the conversation.

"So," I asked, quite innocently, "Did anyone have any issues with the data they used for this task?"

Indeed, it seemed many of the children did.

1. Being a photograph, it was difficult to see what some of the objects were. How do you classify them? Do you guess? Do you exclude them? Do you make a separate data category for them - Unidentified?

2. Some of the categories that were given in the data table were difficult to understand. Why was there a category for "Meat" and another category for "Fish and Eggs"? Isn't fish a type of meat? Does fish have more in common with eggs than with meat?

4. Some items didn't fit into any category. What do you do about that? Do you force it into a category that it really doesn't belong in? Do you exclude it? Do you make a new category - Unclassified?

5. Why did different people put the same items into different categories? Why didn't we all agree about how items should be grouped?

And this conversation was just as important as the activity of filling out the table. This conversation gave the kids an insight into data, data handling, data analysis and data interpretation. Suddenly they began to realise that there was a whole lot more going on behind the processing of data - it isn't always as black and white as it seems. 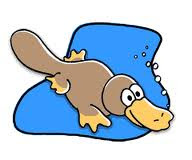 Like scientists argued back in the 18th Century, is a platypus a duck or a beaver?

Posted by Bruce Ferrington at 21:16

Email ThisBlogThis!Share to TwitterShare to FacebookShare to Pinterest
Labels: Data