Day 3 of our Week of Maths and we got to look a bit more closely at some data that compared the average intake of various food groups in four countries - Australia, Italy, China and Ecuador.

The data was presented on the AAMT website in graphs produced on an Excel spreadsheet. It looked a bit like this: 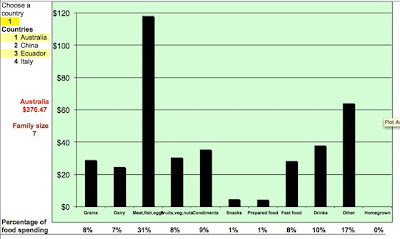 You could enter a value from 1-4 and the data for each country would appear.

The students were asked to get the data from one category and compare it across the four countries. 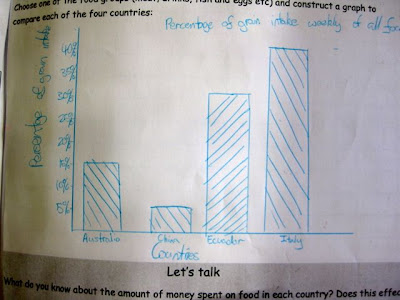 Comparison of grain consumption as a percentage of total 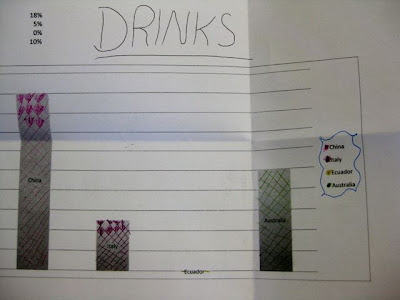 Comparison of drink consumption as a percentage of total.
Do they really not drink anything in Ecuador? 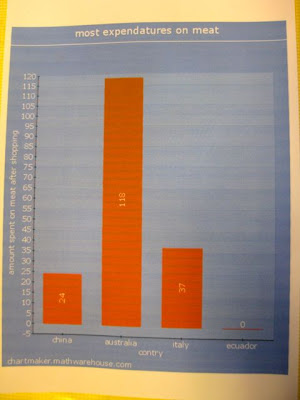 Comparison of average meat consumption in $US per week.

Naturally, once we started playing with the data, the questions started flowing and we were able to make some important generalisations:


1. Garbage in, garbage out


You can only work with the data that you have. If you collect poor quality data, you can't improve it by manipulating it. So, if the data provided says Ecuador has no expenditure for drinks, does that mean:
a) they don't drink anything?
b) they don't pay for anything they drink?
c) the data hasn't been collected properly?

2. Your scale needs needs to have all the numbers up to your biggest quantity


The scale need to be cover the range from your smallest value to (at least) your largest value. It also needs the have graduations that are useful, that make the data accessible and that inform the reader.


3. Say the exact amount for each category

When dealing with data, it is important to be as accurate as possible. It was difficult for students to read exact money values off the graph provided. They resorted to estimating which meant that they ended up with different numbers. This made it difficult for them to compare their information.


4. Spreadsheets can give an exact number - roll overs

At this point, one of the bright young things discovered that if you hold the cursor over the individual data column, the exact dollar amount was shown. Now, that's something you can't do with a piece of paper.


5. Zero is data and we need to show all data

And so the conversation came around to the question of "zero". Ecuador had 0 for several categories of data. Students began to realise that if we leave out zero it will change the meaning of the graph. Zero values need to be included in data sets to show that the question was asked, the measure was taken, the observation was made but the result was zero.

Posted by Bruce Ferrington at 13:27