We have started a new inquiry - this time we are looking at "mass".

I am keen to avoid the confusion between "weight" and "mass" and as a result have deliberately steered all conversation away from this point.

In our initial discussions, I asked the kids what they thought mass was.

They had lots of good ideas, all worth exploring:

It's a measurement of objects.

All things have it.

It is to do with the space a shape takes up.

You can measure it and then compare things.

You measure it with scales and things.

All these were good but a bit general. We needed to get more specific and to get our hands dirty. Time for some inquiry...

We got a range of different balls out of the PE store room as well as a few from home. The job was to arrange them in order according to their mass. Sadly, the teachers had taken away all the weights so the kids had to use the balance scales to compare the balls against each other.

We chose to use a tennis ball, a golf ball, a marble, a ping pong ball, a volleyball, an AFL ball, a bocce ball, a softball and a cricket ball. I was keen to get some examples where the order of size did equate with the order of mass.

So, we got the gear out and broke up into small groups.

Lots of talk. Lots of conversation. Lots of, "Try this one next, I think it's heavier than that one." 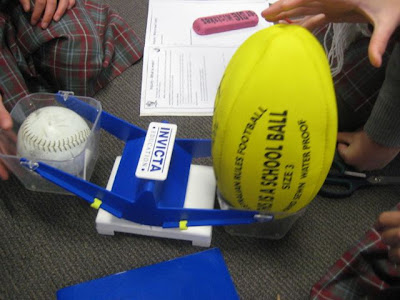 The yellow ball is an AFL ball, for those out there who were puzzled.
AFL is a sport from Australia, which over the last 100 years has been
dominated by the mighty St Kilda Football Club.


And pretty quickly we got to the realisation that it was unnecessary to compare each ball against all the others. Once you had organised 4 or 5 of them, you could start near the middle of the line each time you selected a new ball. If it was lighter, you could compare it to the ones at the lighter end. If it was heavier, you went the other way.

What would be the least number of comparisons needed to add a new ball to the completed line?

The final result - an interesting arrangement

Having got consensus on the line, the kids were then asked to  make an estimate of the mass of each ball. To assist this process, they were told that the golf ball weighed 35g and the bocce ball weighed 4kg - this provided a frame of reference for the estimates.


Finally, many of the students started to play with other ideas. One student came up with a suggestion:

"I want to see how many marbles equal one ping pong ball."

A few minutes later this was modified.

"I want to see how many ping pong balls equal one marble." 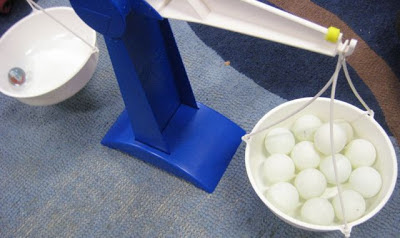 And so began the inquiry into mass.


The next morning. one student came into class and said, "Last night I was talking to my big sister about mass. She told me that mass is different from weight. If you were on the moon..."

(see http://4thgradebigquestions.blogspot.com.au by Capitano Amazing for more information about our school's journey along the road to Home Learning)