Well, we got to the point where we were ready to assess our work on Fractions, to see what we had learnt.

We use a variety of assessment tools, including pencil and paper.

I was interested to see if the kids could explain why some understandings of fractions might be inconsistent, fallacious or even straight-out wrong. So I gave them a few non-examples and asked them to explain what they thought was wrong with the diagram.

Here's some of the responses.


Task - Can you explain what is wrong with each of these examples? 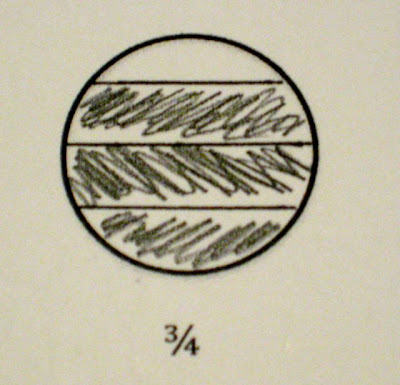 The quarters are not equal.

Not equal = no fractions

All of the fractions are different sizes so they're not fractions.

The four sections are not divided equal. It is important for each section to be equal to make the fractions true.

The bottom and the top of the circle are different areas from the middle.

This is wrong because the are of each shape is different. If it is going to be even then it should be cut like a pizza.

The quarters are not coloured in properly. 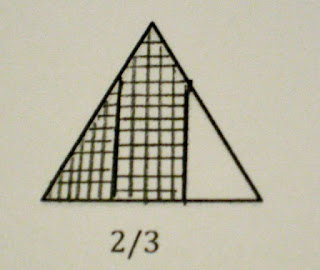 One is bigger than the rest.

Just like the first example this fraction is uneven. Each of the thirds is its own size and they are not equal.

The middle part is bigger than both the other parts making it unequal.

All the squares aren't measured to the correct measurement so they're everywhere.

The lines are slightly off so it's not equal.

The area is not the same as the other parts.

Using grids to shade fractions makes it look like there are more than 3 sections. The thirds are not equal! 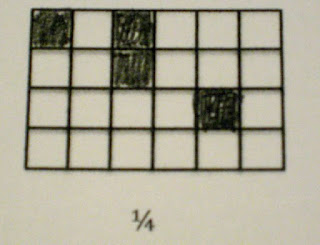 The blacks are scattered.

It's wrong because 1/4 isn't shaded. 6 squares are supposed to be shaded.

The quarters are not accurate.

The fractions are split up all over the place.

Not enough fractions are shaded to get the right fraction. The fraction would be 1/6.

It's not showing 1/4 of the rectangle.

A quarter is not shaded in and it would make more sense to put the shaded parts in line.

Not enough squares are coloured in and it is not very easy to understand.

Well, unlike the other example, this one is even as in shape and the dividing up of the box. But it is false. It says it is 1/4 of this box but it is wrong. It would be 1/6 of this box.

I have not included every response here - only a select few of those that were interesting for one reason or another. There were many children who got the idea for each picture but it was not important to include all the similar answers.

So, it is interesting to see the things that act as distractors for the kids and get them off topic.

Colouring and shading seem to be pretty significant for some kids. It is the thing they focus on first of all.

Also, many seemed to want the shaded sections to be grouped together - but instead maybe they should have been exposed to more examples where they were not.

The diagrams themselves need to be unambiguous. The picture is meant to help the kids see the idea - not confuse them even further.

Lots for this teacher to think about. Some good responses but also some areas that still need clarification.

We will revisit this topic again later in the year... 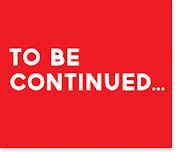 Posted by Bruce Ferrington at 17:52