I''m moving my house to Equador

Year 6 students have been designing and building scale models of houses as part of their inquiry into housing and poverty. After producing a plan for their houses, they started to build them.

Much interesting maths ensued with the application of the scale to the materials. 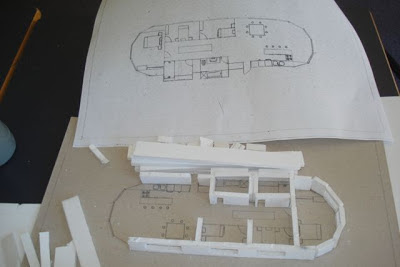 As the houses neared completion, thoughts turned to power supply.

One enterprising group decided to use wind power and constructed their own scale model of a commercial wind turbine, based on the Capital Wind Farm across the border near Lake George which are 124m from the base to the tip of the top blade. 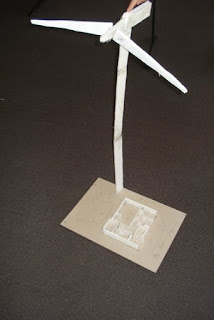 That's the house down there - and that's how big the wind turbine is!

Other groups considered solar power and constructed mini panels for the roofs of their houses.

"Hmm," said one boy, "The panels need to be angled towards the sun to achieve maximum efficiency in energy production."

"What angle would that be?"

"Well, the angle of the sun at its highest point from the horizon I suppose."

"But doesn't that change with the seasons?"

"So can we make the panels adjust and rotate to face the sun automatically?"

"Hang on a minute. If we face the panels towards the sun we can only fit three onto the roof. We can fit four onto the roof if they are square to the edge of the roof."

"But they will produce less energy because they don't face the sun." 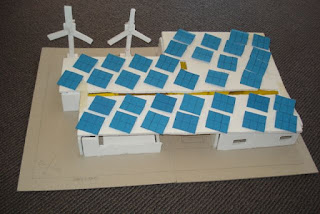 "Are you using solar panels?" asks the first student.

"Yes but I've built a house with a flat roof. How am I going to angle them?"

"A flat roof would be perfect if the sun was straight above it all the time." 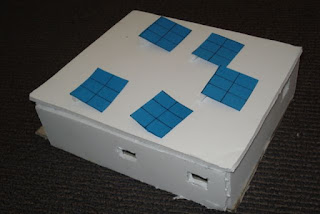 Hmm, the flat roof creates it's own problems

"Where would that be?"

"You know - somewhere where the latitude is 0 degrees."

Grabs an atlas and flicks through to a world map.

"I think I'm going to move my house to Ecuador."

Posted by Bruce Ferrington at 09:41