Some great ideas for investigating "Time'

So you want to investigate "Time"?

Investigating how to measure time? Here's a few different ideas that you might like to use as a provocation to get the kids thinking.

I got this idea from a colleague on Twitter (@turtletoms) and I think it sounds great. Fortunately I dropped my classroom clock last week when I was taking it down to change for the end of daylight savings. The clock ended up in pieces but I should be able to resurrect it for school tomorrow morning.

So, remove the second and the minute hands from the clock and leave only the hour hand. Use this as the timepiece for the day (or week) so that the kids get the idea of what the hour hand does. Where is it at the half hour? At quarter past? At ten minutes to? Hopefully they will also get to appreciate the need for the other hands. A great way to explore what the clock does and the relationship between the parts. 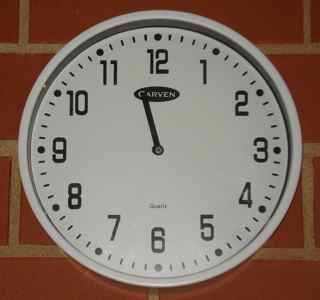 Digging a bit deeper, it seems that clocks originally only had one hand. People living in countries with very old clock towers may be familiar with this fact. 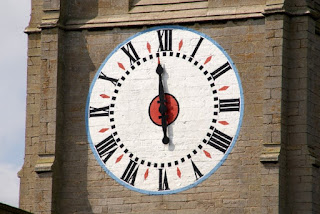 I acquired a box of till rolls from my wife's pharmacy when they upgraded their cash registers to a point of sale system a few years ago. The new machines use different sized paper so I got all the old ones. The long strips of paper are really useful in lots of Maths investigations.

I gave the kids a long strip of paper each. I then asked them to divide the paper into 24 equal sections - we used the width of their ruler for convenience. Then they drew in each box what they were doing in each of the hours and labelled the times appropriately. If you wanted to introduce the idea of a time-scale, you could make each section 6cm long so that 1mm = 1 minute. The strip would need to be 144cm long (24 x 6cm).

You can also use other time scales - weeks, months, years etc.

I have also seen a strip of paper wrapped around the circumference of a wall clock and the parts of the hour (half, quarters, 5 minute increments) were then marked on the paper. When the strip of paper is unrolled, the students can see the "hour" as a length and each of the time divisions as a fraction of the whole or as a number line.

Apparently poor spelling is a consequence of truancy.

Anyway, at our school we have a bell that rings to indicate break times, probably much like most schools around the place. I am a bit perplexed that everyone, children and adults alike, accept that the time the bell rings is the actual time it is meant to ring.

You can use one of many on-line clocks to check the accuracy of your school bells:

..and there are many more.

Put the digital clock of your choice up on a screen and keep a record of when your school bells rings. Compare this with when the bell is supposed to ring.


How many days old are you?

There are web-sites where you can plug in your birthdate and it will calculate your age such as:

But, before showing these to the kids, I would be really interested to see how they would go about working it out. This is not an open-ended task but it has great potential to explore problem solving strategies. Allow significant time for kids to work through a series of mistakes and miscalculations (we call these "opportunities to learn" in 4BF). See if they can come up with a "formula" that can be applied to any birthdate.

Then I'd let them loose on the websites to see how accurate their own calculations are.

And just for fun, a favourite website of mine that is pure enjoyment - the kids and I all love the big bang noise when you finish and it says, "STOP.....THE.....CLOCK!"

And here is a picture of the classroom clock from my daughter's maths classroom: 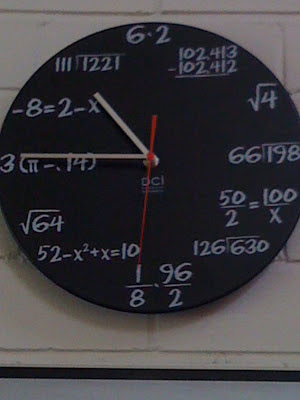 Thanks Mr H for the inspiring idea!

I was reading a book last year called "The Case of the Hail Mary Celeste", a speculative fiction book by Malcolm Pryce. In the book, Pryce mentions that time zones were not formalised until the advent of railway lines. The railway timetable meant that some sort of standardisation was needed across countries where previously each town and city had had marginally different times based on their meridian of longitude.

"No way," I thought. "Interesting idea to make your book that bit quirkier than it already is..."

Across England there were towns that "held out" against the imposition of "London time", such as Bristol and Exeter. In Bristol, for example, the town clock introduced an additional minute hand two, one to show "London" or "Railway" time and one to show true local time. 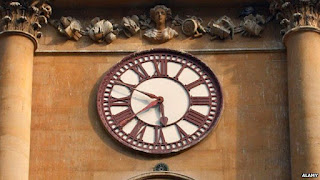 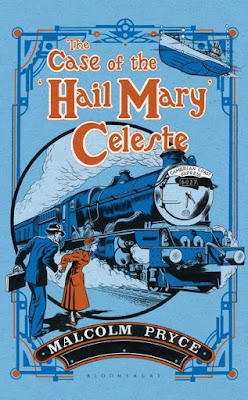 ...and the book that prompted my personal inquiry into time.

Posted by Bruce Ferrington at 09:13