I Can't Do this! It's Impossible!

Is this a valid response to a maths question? Is this an appropriate way for any student of mine to speak in class?

Sure. Particularly when the question being asked was deliberately.....impossible.


So What Was The Problem?

The kids were asked to make a square. Then, using one single straight cut, they had to produce an equilateral triangle.

The results were many and varied. 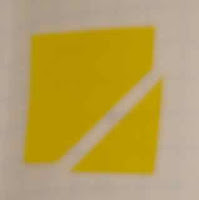 What did they do?

Many kids rushed straight in and went "Snip! - Done it!", holding aloft a beautiful triangle. But was it equilateral? Well, maybe not but the problem was half solved - at least we had produced a triangle.


That Beautiful Moment of Confusion and Panic

Next ensued that period of chaos as kids rethought their initial ideas and tried a variety of different techniques. Not surprisingly, every triangle produced was a right-angled triangle.


And then, the Moment of Revelation

Having battled with the idea for 15 minutes, one student finally sat back and said, "This is impossible!" Whether he meant, "This is impossible for me." or "The is mathematically impossible." I'm still not sure but it doesn't really matter - he had come to the realisation that maybe there was no solution.

Almost simultaneously another, more mathematical, student observed that the hypotenuse (not her word) would always be longer than the other 2 sides, no matter how much longer you made the sides. Focusing solely on the sides, she realised that she could not get them all to be the same length.

And then the conversation was deftly redirected (by me) to consider the internal angles. To be an equilateral triangle, all angles needed to be 60 degrees. Suddenly, the kids saw that no matter where they cut a line in the square, there was always going to be a 90 degree angle.

Is it Fair to Ask Impossible Questions?

Fair? Unfair? Right? Wrong? Is there a moral dimension to this? - I doubt it.

What I do know is that this provocation produced some good thinking. Kids had to work from what they knew about shapes to think about what they were trying to do. When they exhausted all their possibilities, they were left with a solution - maybe I've proved that it can't be done.
Posted by Bruce Ferrington at 12:57

Email ThisBlogThis!Share to TwitterShare to FacebookShare to Pinterest
Labels: Inquiry