How did they measure time back before time began?

In 4BF we are currently investigating "Time". I wasn't really interested in printing off pages of clock faces from the free download sites. I wanted to get a bit deeper into the concept of measuring time itself. Yes, we did spend some time revising our skills and discussing the mechanics of telling the time but the focus was always going to be on something bigger and better.

After a bit of a discussion on historical lines, the kids identified a few early time-measuring devices. We had a good collection of sand timers in the storeroom, so we took them outside and had a play.

Activity 1 - see how many times you can walk around the quad before your sand timer runs out. Repeat this three times.

Activity 2 - see how long it takes to empty your water bottle into the garden. Repeat this three times.

By the time we got to the second activity, the kids were beginning to question why they had to do each activity multiple times.

Activity 3 - see how long it takes to pour a container of rice through a funnel and into a second container. Repeat this three times.

We used stopwatches to time Activity 2 and 3. By timing each activity multiple times, the kids were able to see the variability of each method and question the accuracy of water timers and such devices.

Well, so far it's been a lot of fun but it was still pretty much teacher-centred. I asked some questions and gave out some equipment and the kids went off and explored the way I wanted them too. It was time to loosen up a bit and see where the kids wanted to head.

Activity 4 - design and build a device to measure 10 seconds.

After some more discussion about measuring time and what it all meant, we agreed that it might be interesting to see if we could build out own timing device. Some suggestions were going to be a bit impractical (in a school context - like how to measure really long periods of time like seasons or years - but it showed that someone was thinking big picture ideas) we settled on measuring 10 seconds.

The children were given two days to work on their device, some class time but most kids worked at home on testing and producing the device. Results were all really exciting and the kids spent significant time trialling and modifying their designs. Here are a few examples of what was produced:

A simple "sand" timer using 2 plastic bottles and rice. Interestingly, the timing was faster when pouring from the bigger bottle to the smaller than when it was inverted. This provoked much discusion about why, what caused this, did the sizes of the opennings matter, etc

This was a rather complicated, but effective, arrangement of three plastic cups connected with string. The red-coloured water in the top cup (note the fill linein black) runs through a hole in bottom, down the string into cup #2 and then through a hole in the bottom of that into cup #3.

Following more conversation about alternative timing devices, three kids came back to school the next day with candles that they had scaled to measure time. One girl had bought 2 identical candles and set the timer on her iPod to beep each hour. She light one candle and saved the second one. Then she marked the scale on the unused candle each hour when the iPod went off. I loved the juxtaposition of the iPod and the candle clock! 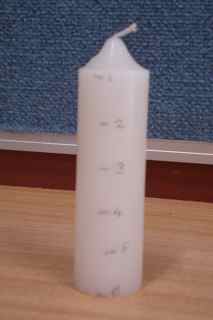 Here's a pic of one of the candle clocks. We have a few more in the pipeline and will post them when they are ready - hopefully tomorrow.

All in all, lots of fun, some good inquiry, lots of questions and I think we all learnt something about measuring time!