Throughout the year, I have been using Jo Mulligan's "Patterns and Structure Mathematics Awareness Program" (PASMAP) as a resource to stimulate some direction in my maths inquiry with Year 2. It is a great initiative that brings a clear focus onto the significance of spatial reasoning in all areas of mathematics education. The kids love it. 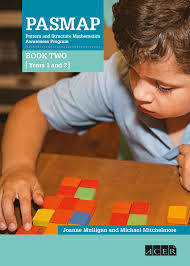 
We have spent a lot of time playing with patterns. I wanted to explore the link between the pattern and the numbers behind it. This exploration was going to be related to some of the PASMAP ideas, so I can't take credit for them but I think we explored a few interesting related ideas as well.

This "lesson" or "sequence" went over about 4 days. It started with a counting pattern. It ended up looking at the relationship between square and triangular numbers.

This is going to take a few posts...


Anyway, we started off looking at what happens when we count by 3's. This is a good pattern to look at because it is slightly more difficult than counting by 2's or 10's but not so difficult as to be out of reach.

So I asked the students to show a counting by 3 pattern using our favourite Cuisinaire rods. Here is what they produced: 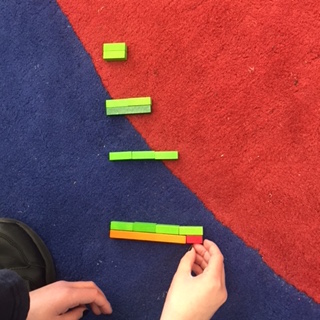 Using the light green as 3, this is a nice representation of what happens when we count up by 3.
Notice the outline of the pattern is starting to look like a triangle... 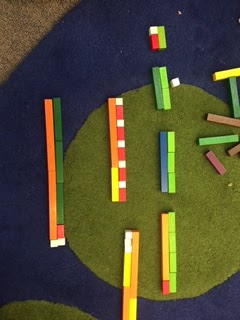 We did start to run out of light green rods so this student did some interesting substitutions:
i) using a red/white combination to replace the light green
ii) using the dark green to represent 2x light green
This student is showing both additive and multiplicative thinking - great fluency! 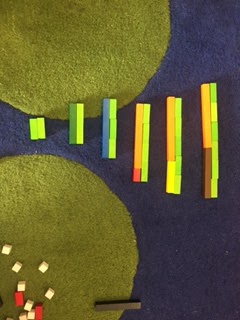 A-ha! The triangle shape is starting to emerge! 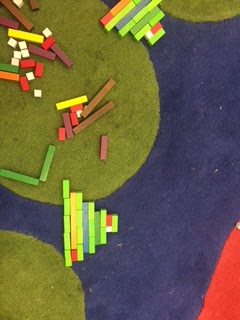 
Exploring the Counting by 3's Pattern

As mentioned, I wanted to take the conversation deeper and to get the students to start thinking about representing the pattern using numbers.

The PASMAP program encourages a pedagogical model based on five components:

We were heading into the "Representing" phase.


The "Zero Row" - an important aside

During the recent holidays, I attended the AAMT national conference in Canberra (Actually, we were hosting it). Several times during the week, I heard speakers refer to the "zero row" - the very first step in a pattern.

So of course, when we started talking about the counting by 3's pattern, this was where we had to start.

Talking through what we had made on the floor, I asked the students to describe each level of their pattern. The pattern itself was not a new one - they had seen it before - but I was interested in seeing what it would reveal.

We came up with this representation: 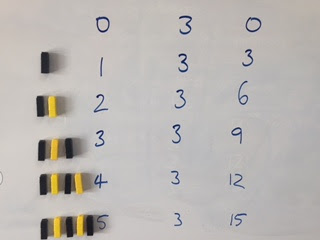 Firstly, I used some Unifix cubes and some Blutack to show the pattern on the whiteboard.

Column 1: the representation
Column 2: number of groups
Column 3: how many in each group
Column 4: total number of cubes

Yes - we included the zero row.

Then I asked, "Are there any mathematical symbols we could put in between the numbers to make number sentences?"

Really? Well we tried it and guess what? It didn't work. 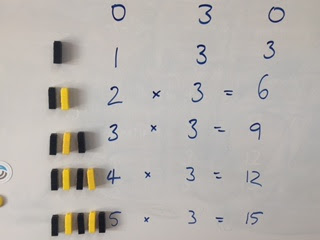 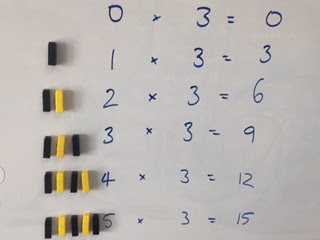 "Can we see any more patterns in there?" asked the annoying teacher, not satisfied with the hard work the students had put in. 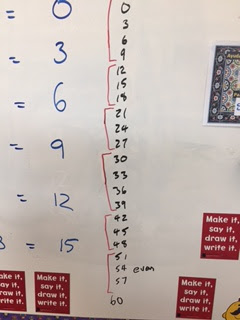 Anita Chin's fabulous "Make it, say it, draw it, write it" magnets on the white board

So we wrote out the counting by 3's pattern up to 51. Then we looked at what we saw:

Using these patterns, I speculated about what numbers we would find after 51, without needing to actually count by 3's.

I wonder if that is always true?