Here is something cool we did in our class. It started off quite simple and then ended up with some questions that we are still thinking about.

So I was playing around with the Unifix cubes and I thought to myself, "What if we used the cubes to represent counting pattens and then we lined them up side by side? What would that look like?" 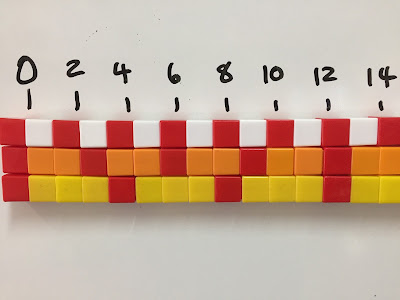 So I made a number line and we started laying out the patterns.

The top pattern is the counting by 2s pattern - the white are the odd numbers and the reds are the multiples of 2.

The second row is counting by 3s, the one below is the counting by 4s - I think you get the idea.

The kids thought this was starting to look good so we went a bit further. 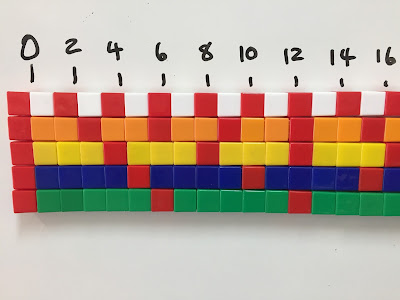 We decided that starting at zero was important. And we decided that zero should be red - because it fitted the pattern (because zero is a multiple of all numbers).

And so I asked, "What patterns can you see?"

And here is what we found: 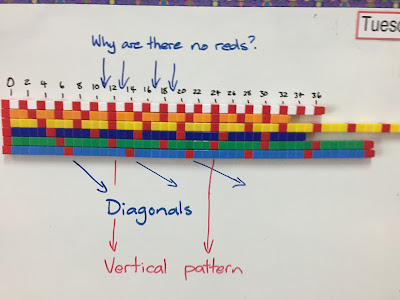 We found some nice looking diagonals and also some verticals.

Could we use these patterns to predict multiples of numbers that we hadn't modelled yet?

And why don't some numbers have any red at all? Could there be something special about them?

And what would happened if we extended our lines further?