This afternoon I attended a Canberra Maths Association (CMA - check out our website or Facebook page) workshop on Fractions being run by Caroline Evers.

Caroline is a Canberra teacher with a great breadth of experience from primary school up to college level. She had some great ideas that she shared. I want to show you one of them. It is beautiful in its simplicity but in the multiple layers of depth that you can uncover with it.

We chose some coloured A4 paper and had to fold it in half, then in quarters, then in eighths. I did mine like this: 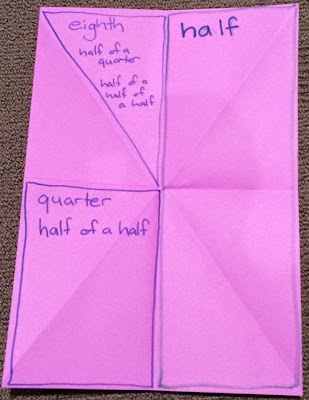 We labelled the sections as we went along.

"This is a quarter. I made it by getting half of a half."

"A half is bigger than a quarter."

"This is an eighth. It is half a quarter. It is a quarter of a half."

See this conversation? We are already laying the groundwork for multiplication and division of fractions!

But we could also compare and combine the different fractions to see which were biggest, smallest, equal etc.

The Caroline moved us on to thirds and sixths. Fold A4 paper in half, then into thirds. Label as you go: 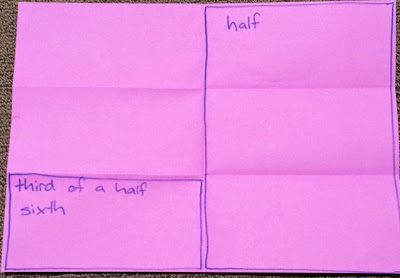 And then we did fifths and tenths: 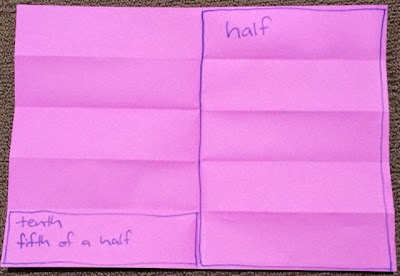 You guessed it - a fifth of a half is a tenth. And there are 5 tenths in a half. Sounds like equivalent fractions to me.

And it is all so visual.

You could do this with early years classes to show what fractions look like and get that understanding of what a fraction of a whole is.

You could use it with upper primary classes to look at equivalent fractions, adding and subtracting fractions and even looking at comparing areas of rectangles (e.g. - all the different ways you make an eighth of a piece of A4 will have the same area).

And you can use it in high school when you start to multiply and divide fractions with different denominators. Or with fractions in algebra. Or with...

Ah! It looks so simple on the outside but this activity has lots of possibilities. Give it a go and see what you can do with it...