We recently had a visit to our school from Ellie Cole, Australian paralympic legend. She trains and studies in Canberra so was out visiting local schools after her huge efforts at the London 2012 Paralympic Games where she won 4 gold and 2 bronze medals in swimming. 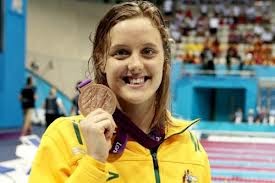 Here is a link to our school website with a picture of Ellie with some of our students, including two lucky kids from 4BF!

﻿Anyway, while Ellie was talking to the kids about her life, her battle with sarcoma and the "Kick Sarcoma" organisation she represents, she said a really interesting thing.

While she was having breakfast at the paralympics she met some people who she considered to be really inspiring. They were athletes with severe physical disablilities who were doing great things in representing their countries at the paralympics.

One such athlete Ellie mentioned had no arms yet he was able to eat his breakfast by holding his cutlery with his feet. Ellie, who is pretty amazing herself, said she was enormously humbled and challenged by what she saw around her.

If they couldn't do something the way everyone else did it, they found another way.

This is exactly what I want the kids in my class to hear.

And this is exactly what I want them to do.

Inquiry is all about finding new ways to do things, to solve problems using your own strengths and overcoming your own limitations. To be a life-long learner is to be constantly seeking to find another way...

Posted by Bruce Ferrington at 16:02