...can you have the concept?

There is a school of thought in Linguistics called Whorfianism, named after Benjamin Lee Whorf, who proposed that our understanding of the world around us is framed by the language we use to describe it.

"The 'real world' is, to a large extent, unconsciously built upon the language habits of the group."
Sapir, E. (1929). 'The Status of Linguistics as a Science". I E. Sapir (1958): Culture, Language and Personality (ed. D. G. Mandelbaum). Berkeley, CA: Univesity of Califronia Press as quoted in "The Sapir-Whorf Hypothesis" by Daniel Chandler at http://www.aber.ac.uk/media/Documents/short/whorf.html

If this is so, then our understanding of Mathematics is determined by the language we use to express it. And if we have no word for "zero" then we can have no idea of the concept of "zero".

Ancient Rome had no zero as a part of its numeric system. One of the benefits of using the Hindu-Arabic number system is the zero and having ten unique digits that we can use to make a base10 number system. Roman numerals had no such features and was completely awkward as a number system for calculations.

Edward Sapir - the other half of the Sapir-Whorf Hypothesis

You've probably heard﻿ the case quoted of the Inuit language having more than 100 words for snow. Australian indigenous languages are often quoted as having the opposite issue - not a surplus of words but a dearth of words specifically in relation to numbers. Some of these languages are cited as having a numerical vocabularly of only two words - "one" and "many".

But does this mean that Australian indigenous people can't tell the difference between 3 objects and 100 objects, just because they don't have the words for "three" or "hundred"? 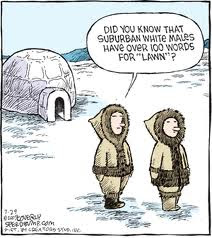 The problem often identified with Whorfianism is that it suggests that language is formulated before the actual concept it is going to describe. Is that possible?

Probably not. And then you could have lots of arguments about what came first, the chicken or the word for chicken. 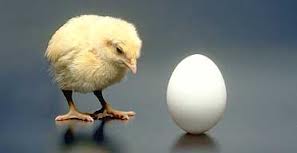 SO, while it may be true that language has a part to play in understanding and concept development, not many linguists would subscribe to pure, hard-line Whorfianism.

And even if you don't reject the hypothesis outright, there may be some middle ground where you can actually argue that.....

.....without a word for "zero" you can still have a concept of what "zero" is - but it may not necessarily be the same concept as those who do have the word.

Hope that clears it up.

And never forget the significant role that language plays in maths.

Posted by Bruce Ferrington at 19:39