This morning I had the opportunity for some quality time with Year 2. I wanted to see what they could do with numberlines. And how they could use them to explain addition and subtraction.

So we started off with a strip of paper that we wrapped around our heads - seemed like the best place to start.

We compared strips of paper and found that, yes, one was indeed longer than the other. I asked them if they knew a word that would describe that bit of overlap - but couldn't draw out the word "difference" so I had to tell them.

Next, we had a general chat about how to draw a numberline and then had a go at representing our head data:

This they did (sorry, no photos of this bit) as it was quite an easy calculation to make. The answer (4cm) was never going to be a surprise but I wanted to see them using a known fact before we explored any further.

Then I asked them to use a numberline to show me:

And so the fun began!

Here is what we came up with... 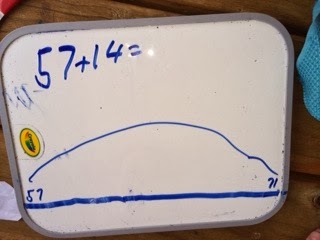 So, in one jump we go straight from 57 to 71. This is mathematically correct but shows me nothing about using a numberline or the process behind the operation. I asked for more information - and got a blank stare. 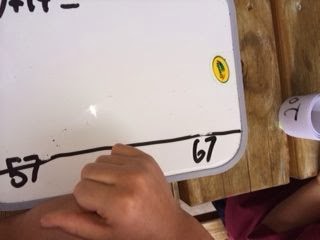 Another student started with this idea - what if I jump by 10 straight to 67? But, seeing that space was running out, she wiped out the line and started again... 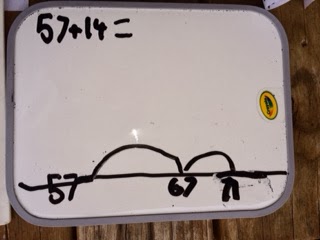 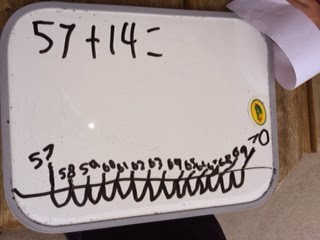 Here's where it gets messy. As the numbers get closer together, there student runs out of room and ends up skipping one of the jumps that he is numbering, so the jump between 69 and 70 is not labelled. Yes - we do need to be careful when construct a numberline.

This was just an introductory activity to get an idea of what the Year 2 students understood about numberlines.

1. we talked about some of the important features, such as labels, direction, accuracy and infinity

2. we talked about how to make "provable" jumps, not just blind leaps to apparently random answers

3. we modelled addition on a numberline

4. we laid the groundwork for future explorations using numberlines for other applications

5. we had some fun and I got to meet a few students who I didn't know before. Looking forward to getting back in to see them on a regular basis.