This is a sequence that went over several days. I don't think we are finished (yet) but I wanted to get the initial stages written to clarify my thinking.

I was interested in looking at proportional reasoning. We had done a fair bit with fractions (halves, quarters etc). It was becoming obvious that we might benefit from some time looking at the relationships between the values of numbers and how we could represent this with size/length/area to make the relationship visual. 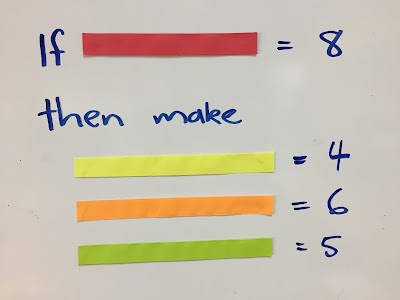 I had a stack of coloured strips cut up.

The red strip is noticeably shorter (24cm) than the other colours (yellow, orange and green are all 29.5cm - the length of a piece of A4 paper). This was deliberate. I wanted the students to refer to the value they were certain of (red = 8) and use this as the basis of their reasoning, rather than simply fold each strip to the fraction of the whole.

eg if yellow = 4 (which is half of 8) then I might be tempted to just fold it in half without having to refer to the red unit at all.

After a time, two strategies emerged;

Some students decided that all the coloured strips needed to start off as the same length. Then they could fold yellow in half so it equalled 4; fold orange into quarters and then cut off one section to leave 3/4 because 6 = 3/4 of 8; then fold green into 8 parts and cut off 3 parts (5 = 5/8 of 8)

Other students folded the red strip into 8 equal parts and used this as a "ruler" to measure where to cut each of the other strips.

This was an interesting starting point. 8 was a good number because finding 4 and 6 was relatively easy but finding 5 required a bit more thinking. 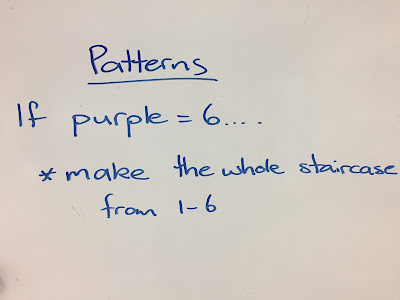 And here are the strips I had prepared: 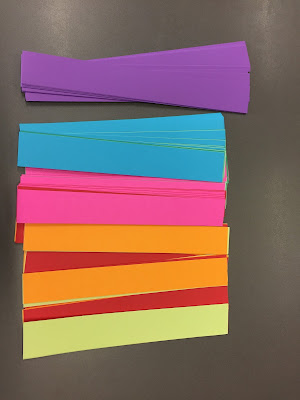 Look - he's done it again. Can't this guy cut the strips to even lengths?

No - I wanted to play with the kids' heads again. This time the purple strip (=24cm) was given a value of 6. How would you work out how long the other strips should be to show 1-5?

The kids pretty quickly realised they would have to find a way to divide the purple strip into 6 equal parts. Here is what happened: 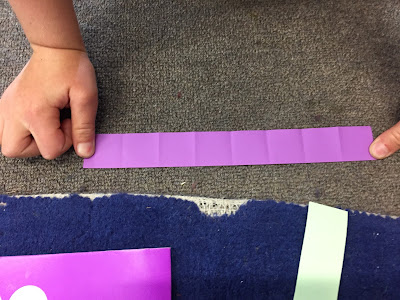 Other students folded the purple strip into 3 parts using the z-fold technique. Then they folded this in half to make 6 equal parts. 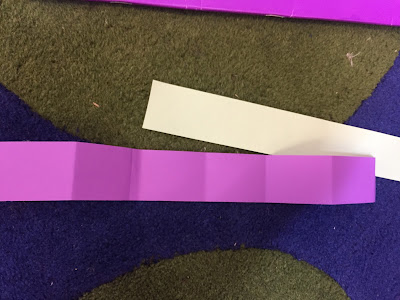 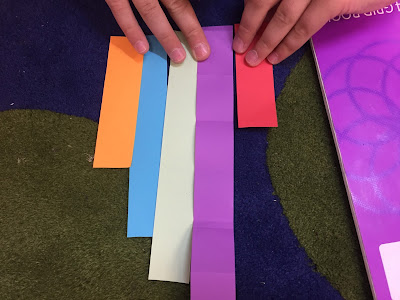 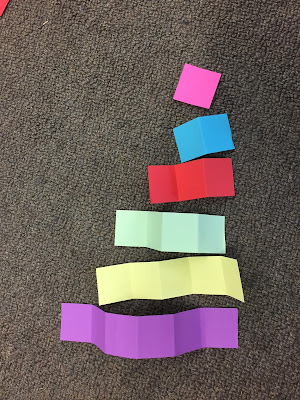 Not the most efficient strategy but totally effective, this student worked out how long a unit was, and then proceeded to cut out individual units in each colour and used these to establish the numbers 1-6. 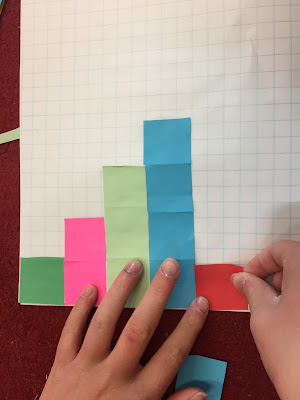 What we found out

When we put these staircases into our 1cm grid books, we quickly found out that there was a number pattern. By counting how many squares high each step of the staircase was we found a counting-on pattern.

For students who used Strategy 1 or 3, the purple strip was 18cm long. They had started with 24cm then folded it into 8ths and then cut of 2/8 to make 6 equal parts. So their number pattern was the counting by 3's pattern. 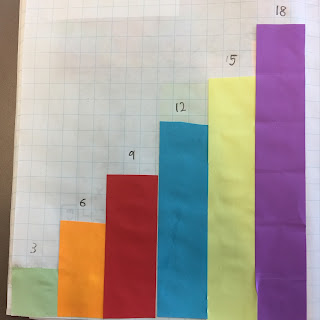 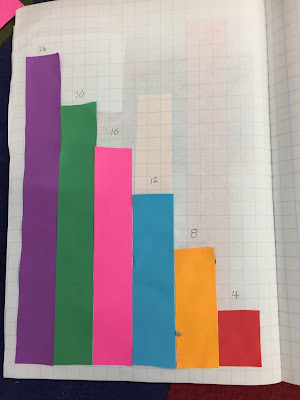 Interestingly, no-one had considered using a ruler. They were busy exploring the relationships.

We also found out it was important to be accurate. In this picture (below) pink = 1 and blue = 5. But when they are put together, they are longer than the purple, which is meant to equal 6. This student has not fully understood the task. Their purple is folded into 8 sections. Their other units for 1-5 are a random series of increasing lengths.

At this point we paused and reflected on what we needed to do. 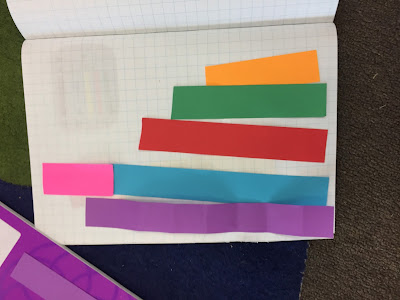 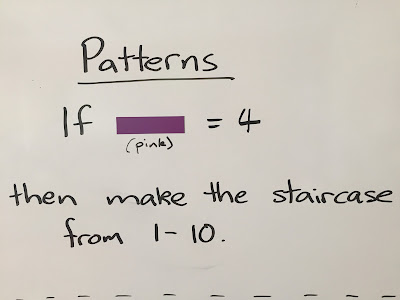 And so we moved to the next proposition. If you are given a unit (such as pink = 4) can you find the numbers less than and more than?

The students had made the Cuisenaire staircase hundreds of times. They quickly noticed that I had conveniently provided strips of paper using all 10 of the Cuisenaire colours. 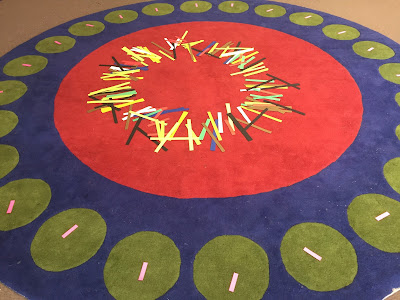 This is the scene that greeted the kids when they came into the room.

They also noticed that the coloured strips were of varying sizes. Once again, I didn't want them to rely on any value other then pink = 4. 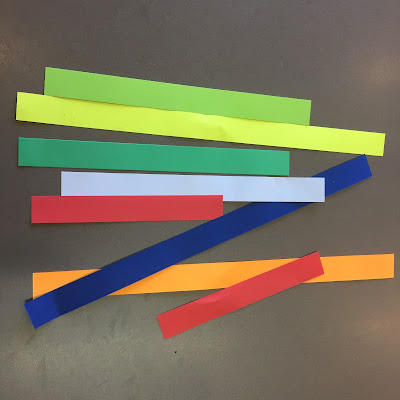 We were now showing that we understood the need to use pink = 4 as our basis for our reasoning about where to cut the other coloured strips.

There was much folding and cutting - and some even began to use additive strategies to find new numbers. For example, once I had calculated 2 and 3, I could work out 5 by putting them together. This showed me where I should cut the yellow for 5. 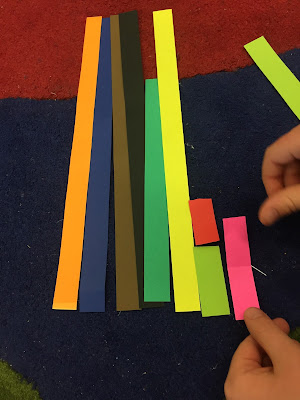 Some students used the white (=1) to add onto the end of their latest length to make the next length, showing that the number after n is n +1. 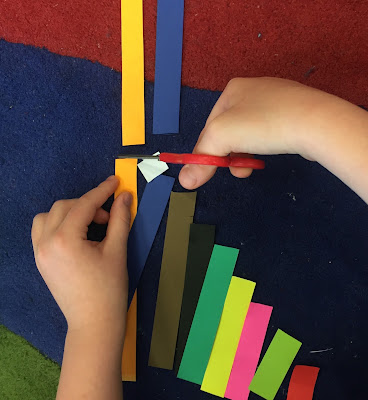 Some other students developed their own "ruler" once they had found the value of white = 1. They used this standard unit ruler to measure where to cut each strip. 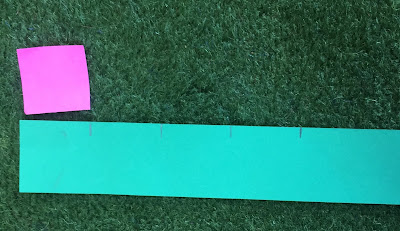 And our friend from yesterday persisted with the strategy of cutting each colour into individual units and the glueing them into the book. 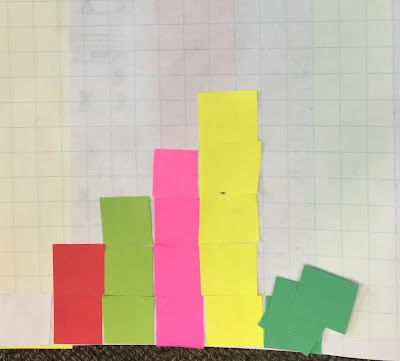 As I observed each of these events unfolding, I stopped the class and we had a moment of reflection to see what we could learn from each strategy.

Once we were done

After we had produced some nice looking staircases, I brought the class back together for another chat.

We had been thinking that pink = 4 all through this task.

Suddenly it all became clear - the model we had played with for half an hour was just a representation of a relationship based on proportion.

We could use reasoning to work out that...

"I think it should be 1.0," said one student. "We are talking decimals here you know."