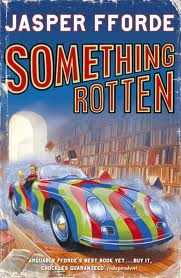 
In this part of the story, Thursday is again talking with her Uncle Mycroft, the inventor. He has been thinking about working backwards from solutions to find out what the question was. He calls this "Nextian Number Theory":

'What work were you presenting to MadCon '88?'
'Theoretical Nextian mathematics, mostly,' replied Mycroft, warming to the subject dearest to his heart — his work. 'I told you all about Nextian geometry, didn't I?'
I nodded.
'Well, Nextian number theory is very closely related to that, and in its simplest form allows me to work backwards to discover the original sum from which the product is derived.'
'Eh?'
'Well, say you have the numbers twelve and sixteen. You multiply them together and get 192, yes? Now, in conventional maths if you were given the number 192 you would not know how that number was derived. It might just as easily have been three times sixty-four or six times thirty-two or even 194 minus two. But you couldn't tell just from looking at the number alone, now, could you?'
'I suppose not.'
'You suppose wrong,' said Mycroft with a smile. 'Nextian number theory works in an inverse fashion from ordinary maths — it allows you to discover the precise question from a statedanswer.'
'And the practical applications of this?'
'Hundreds.' He pulled a scrap of paper from his pocket and passed it over. I unfolded it and found a simple number written upon it: 2216091 -1, or two raised to the power of two hundred and sixteen thousand and ninety-one, minus one.
'It looks like a big number.'
'It's a medium—sized number,' he corrected.
'And?'
'Well, if I was to give you a short story of ten thousand words, instructed you to give a value for each letter and punctuation mark and then wrote them down, you'd get a number with sixty-five thousand or so digits. All you need to do then is to find a simpler way of expressing it. Using a branch of Nextian maths that I call FactorZip we can reduce any sized number to a short, notated style.'
I looked at the number in my hand again.
'So this is?'
'A FactorZipped Sleepy Hollow. I'm working on reducing all the books ever written to a number less than fifty digits long. Makes you think, eh? Instead of buying a newspaper every day you'd simply jot down today's number and pop it in your Nexpanding calculator to read it.'
'Ingenious!' I breathed.
'It's still early days but I hope one day to be able to predict a cause simply by looking at the event. And after that, trying to construct unknown questions from known answers.'
'Such as?'
'Well, the answer: "Good lord, no, quite the reverse!" I've always wanted to know the question to that.'
'Right,' I replied, still trying to figure out how you'd know by looking at the number nine that it had got there by being three squared or the square root of eighty-one.
'Isn't it just?' he said with a smile, thanking my mother for the bacon and eggs she had just put down in front of him.

from "Something Rotten" by Jasper Fforde

Posted by Bruce Ferrington at 09:48